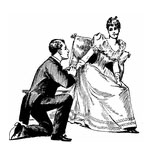 A True Turnaround, A Real Revolution

A COPERNICAN RE-VISION OF SEX

By Mary Rosera Joyce | July-August 2012
Mary Rosera Joyce, a former teacher of philosophy and psychology, is the author of many books and numerous articles. Her latest publication, about the meaning of active receiving, is The Future of Adam and Eve: Finding the Lost Gift (LifeCom, 2009). Her website is www.lifemeaning.com.

Imagine the shock of learning that the obvious is not what it seems. In 1543 the Polish astronomer Nicolaus Copernicus shook up scientists, philosophers, and theologians by proving that the sun does not revolve around the earth, and that the earth is not the center of the universe, as taught by Ptolemy. Although Copernicus, and others before him, had suspected this and theorized about it, his book On the Revolutions of the Celestial Spheres became regarded as the defining proof.

Though to the human eye the sun appears to rise in the east and set in the west, it actually does no such thing. The earth is not the center of the physical universe; it is a rotating sphere that revolves around the sun.

This change in view did not come easily. According to a letter from Galileo to Johannes Kepler in 1610, some of the intellectuals at that time were so opposed to this new concept of the cosmic world that they refused to look through a telescope to see the evidence.

The new awareness of reality provided by Copernicus was an opportunity for philosophers and theologians to develop their own “turnaround way of thinking.” But they failed to see its relevance for their own particular areas of truth-seeking. Other matters besides the cosmic were waiting, and are still waiting, for a Copernican-like revolution. One of the most urgent of these is our way of interpreting human sexuality.

Doing Well & Doing the Work of the Lord

You are a U.S. taxpayer. Let’s assume you have a rental, or maybe some stock,…

Why I Remain Seated When I Hear Handel's Hallelujah Chorus

King George II rose from his seat during a performance of Messiah, then others rose because etiquette required everyone to rise whenever the king rose.