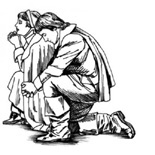 Browsing the “Catholic” shelves in my modest home library, I see The Spiritual Exercises, The Interior Castle, The Imitation of Christ, and The 12 Steps to Holiness and Salvation, among others. There is also a pamphlet I received in the mail informing me of seven spiritual acts I should perform each day. The various Catholic spiritualities that have formed over the centuries — Ignatian, Carmelite, Benedictine, to mention only a few — are a treasure of the Church, but they can also leave us somewhat bewildered, as they seem to pull us in different directions. We thus wonder “where we will find the strength to do all that is required,” as the Carmelite priest Wilfrid Stinissen writes in his book Into Your Hands, Father: Abandoning Ourselves to the God Who Loves Us (2011). “What we need most,” he concludes, “is a central idea, something so basic and comprehensive that it encompasses everything else. In my opinion that central idea is surrender.”

By surrender Fr. Stinissen means surrender to divine providence. Among the books on my shelf is a small one that is easy to overlook. It is called Abandonment to Divine Providence; its author is Fr. Jean-Pierre de Caussade, a Jesuit who lived in eighteenth-century France.

Fr. Caussade’s book is not a great one, but it is an essential one. Among the various Catholic works that deal with divine providence, his might be the most accessible. It is also a particular pleasure to read, thanks to Caussade’s engaging prose style.

Fr. Caussade didn’t actually set out to write this book. Abandonment to Divine Providence was assembled by a fellow Jesuit priest over one hundred years after Caussade’s death from his conference notes and letters to the Visitation Nuns in Nancy in northeastern France, for whom he was spiritual director. The resulting book, which was first published in 1861, is basically a patch job, but one of the more successful in Catholic spiritual literature.

In his writings, Fr. Caussade claimed he was carrying out the divine will: “God has compelled me to write this to help you who seek to be holy and are discouraged by what you have read in the lives of saints and some books dealing with spiritual matters.”