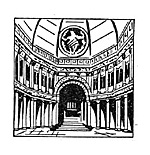 THE THIRD TYPICAL EDITION OF THE ROMAN MISSAL

By Rosemary Lunardini | November 2010
Rosemary Lunardini, who writes from Hanover, New Hampshire, is the author of The Mass in My Life: Cries of the Heart in the Prayers of the Mass, published by iUniverse and reviewed in the January-February 2010 NOR.

The world’s English-speaking Catholics will soon have a new Roman Missal that will provide a new translation of the Order of the Mass and all other prayers of the Mass throughout the liturgical year. The Church sees the new missal, which was formally approved by the Vatican this March, as a continuation of the renewal of the liturgy called for by the Second Vatican Council. With the decade-long process of translating the missal from the original Latin, the English-speaking bishops have taken a major, defining step toward an “authentic liturgy” envisioned by Pope John Paul II. The missal is a mix of the old and the new; although it draws out some phrasing that exists in the Tridentine Mass, it is by no means a copy of it.

The new General Instruction of the Roman Missal (Third Typical Edition) will be seen as a legacy of Pope John Paul II, who announced it in 2000, although the Latin text would not be available for another two years. The Vatican’s 2001 instruction Liturgiam Authenticam set forth directives for the translation of missals (and Bibles), calling for a formal, exact translation to replace the looser, idiomatic translation style used in the 1970 and 1975 missals. Liturgiam Authenticam explains:

In order to take full advantage of the experience gained since the Council, it seems useful to express these norms from time to time in terms of tendencies that have become evident in past translations but which are to be avoided in future ones. In fact, it seems necessary to consider anew the true notion of liturgical translations in order that the translations of the Sacred Liturgy into the vernacular languages may stand secure as the authentic voice of the Church of God. (no. 7)

Among its many directives, Liturgiam Authenticam calls for biblical references in the Mass prayers, a style that befits the sacred liturgy, a richness and variety of vocabulary and imagery, clear theological distinctions, and certain grammatical and poetical ways of drawing out the beauty inherent in the prayers.

In his revision of the Good Friday prayer for the Jews, Pope Benedict didn't compromise the call to "preach the gospel to every creature."

A First Reckoning With the Latin Mass

The Latin Mass is an immersion in mystery and an intricate recognition of my own subordination as simple creature before simple Creator.