Volume > Issue > Prayer Postures: What They Mean & Why They Matter 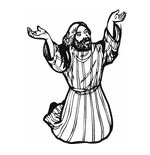 Prayer Postures: What They Mean & Why They Matter

By Heather M. Erb | April 2012
Heather M. Erb is Assistant Professor of Philosophy at Lock Haven University of Pennsylvania. She has extensive teaching experience in philosophy and religious studies at the undergraduate and graduate levels at several major universities, including Fordham, Penn State, University of Toronto, and St. Francis University. She lives with her husband and three children in State College, Pennsylvania.

Saint John Damascene (d. 749) was the first major Christian theologian to defend the faith against Islam. He did so by describing the power of the incarnation, whose energy lies at the heart of the world. The mystery of the incarnation and the sacramental life it offers distinguish Christianity from religions of pure immanence or pure transcendence, which focus solely on one aspect of the divine to the neglect of the full truth. In keeping with Prosper of Aquitaine’s ancient dictum lex orandi, lex credendi (“as we pray, so we believe”), and in light of the revival of Islamic influence in the West, it is paramount to explore the historical, theological, and pastoral considerations implicit in the body language of Catholic and Islamic adoration.

In Islamic worship, adoration in the act of prostration — bending the knees to a sitting position and resting the palms and forehead on the ground in a single action — expresses the worshiper’s humility and sense of utter insignificance before God, and forms the central, repetitive part of the daily salat (prayer). This self-effacing, enclosed posture stresses the distance between the human and the divine.

Clearly, these prayer postures stem from diverse interpretations of the divine presence in the theologies of Catholic and Muslim adoration. For Catholics, eucharistic adoration is the pivot on which authentic mysticism turns because it joins the transcendence of God’s power to the immanence of divine love. God incarnate is manifest and made present in the paradox — indeed, in the scandal — of sacramental particularity. Muslims, however, reject the incarnation. Allah is not understood as “Father,” nor is he present sacramentally. As an affirmation of divine transcendence that avoids the specter of idolatry (shirk), the Muslim is forbidden from casting his eyes on any created thing while performing the ritual salat.

Heaven is often compared to a lavish banquet. But somehow we can't imagine that it involves toilet paper and balloons.

In the years after Vatican II, developments in “New Liturgy” brought into common practice liturgical…

Will the Coronavirus Lockdowns Usher in a Mustard-Seed Church?

The willful suppression of the sacraments by Catholic leaders could portend the diminution of the Church in both numbers and influence.