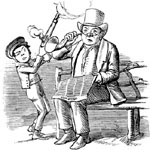 By Brent T. Zeringue | July/August 1998
Brent T. Zeringue, to whom satirical thoughts come unbidden, is the owner of a hardware store in Norco, Louisiana, a former teacher, and the father of seven children, who are home-schooled by his wife.

Ed. Note: It may surprise our readers to hear that shortly after his controversial visit to Regina Mundi Catholic parish in South Africa, President Clinton hastened to the quiet town of Damagecontrol, Maryland, for a visit to the Catholic parish of St. Tarcisius and its little grammar school, where Ms. Tracy Taken, a Catholic and a journalism student at Gorgeoustown University in Washington, D.C., moderated an informal chat between the President and a St. Tarcisius second-grader named Jared. The conversation, which was videotaped, was never shown on television or reported in the press, much to the disappointment of the St. Tarcisius students and teachers. The second-grade teacher, Mrs. Miller, made many inquiries of the media and the White House, but received only terse replies to the effect that the whereabouts of all records of the encounter were unknown. Then Brent T. Zeringue, a NEW OXFORD REVIEW subscriber and a man of many contacts, received a package in the mail, without a return address but with an Arkansas postmark, containing what purports to be the videotape of the interview. He transcribed the videotape and immediately sent the transcript to the NOR. The transcript has never before been published, so we are grateful to Mr. Zeringue for this scoop.

Ms. Taken: Thank you for taking time out of your busy schedule to chat with us today, Mr. President.

Clinton: It’s my pleasure to be here with these fine teachers and children.

Ms. Taken: And thanks to you too, young man.

Ms. Taken: Can you tell us your name?

Ms. Taken: And what is your name?

A scroll was recently found in a clay pot in a cave. The writer belonged to an influential class of ancient Judeans called the Amerisees.