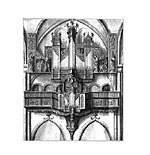 By Lucille A. Flynn | April 2008
Lucille A. Flynn, who writes from Clinton, Massachusetts, is a former member of the American Guild of Organists and the current organist at the St. Benedict Center in Harvard, a post she has held for 10 years.

From the beginning of recorded time, it has been man’s instinct to raise his voice in praise and supplication to a higher power. We know from the Old Testament that Psalm tones were used in Jewish synagogues. These chants were probably influenced by the cadence of Greek poetry, and may have been the model for the chant sung in the early Christian Church.

History tells us that six rhythmic modes formed the substance and basis for the vocalized verses of the Mass Ordinary. The impetus to use the chant in Mass was supported and encouraged by Pope St. Gregory the Great (590-604). With the exception of the Greek Kyrie, the Ordinary of the Mass was sung in Latin.

The development of Gregorian chant reached its peak in the latter part of the medieval period. It was at this time that one of the most beautiful pieces in our Gregorian repertoire was written. In the middle of the 13th century, Thomas of Celano composed the hauntingly beautiful Dies Irae, which is still chanted in funeral high Masses.

During the Middle Ages, some composers began to disdain the single-line chant and added another melodic line to be sung as melody against melody, or voice against voice. This is called counterpoint and was widely employed by such early composers as Pale­strina and Bach, et al. The demand for music of a harmonic nature spurred the development of an instrument that could deliver multiple sounds. Craftsmen worked on combining wind instruments (e.g., pan-pipes) with stringed instruments (e.g., lutes). They produced a keyboard to bind these dual sounds into one voice, and thus was born the primitive organ.

Pennsylvania built the first Catholic churches in the U.S., and its music gained renown even among non-Catholics.