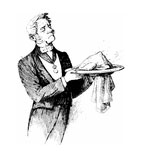 The holiday season is upon us: a time of merri­ment, good fellowship, and banqueting — and a time, for many Christians, of guilt-ridden breast-beating. How can we kill the fatted calf (even if we can still af­ford the inflationary beast) when others less fortunate do not have one? Should we not instead try to get by on the barest minimum, in protest against the con­sumer society and its values?

Ambivalently torn by competing values, believers realize dimly that they cannot reject the season’s festal board without contributing to the demise of holidays that are essentially or should be holy days; yet the Puri­tan work ethic or a somber strain of Catholic pietism cast a dark cloud of self-doubt over the candlelit table.

I am convinced that more than a few serious Christians have so allowed their negative attitude toward “the world” to influence them that in the realm of eating, as in so many other realms (such as entertain­ment, dress, art, literature), they cut themselves off from God’s creative gifts. I would go so far as to argue that gas­tronomy is not to be classed among the materialistic “lower immediacies” at the bottom of the axiological ladder of values (to use the expression of the late Edward John Carnell of Fuller Seminary), but deserves transcen­dental status! The deadly sin of gluttony is not the equivalent of gourmandism, but its misuse.

Many pietistic souls will be surprised to learn that throughout Scripture eating and drinking are regularly associated with events of the highest theological and spiritual importance. The Bible opens with man’s fall — described in terms of choosing to eat not what God had provided but what he had forbidden; it ends with the Marriage Supper of the Lamb, eschatologically re­storing Eden and ushering in the new Heaven and new earth (Rev. 19:9). The prime representation of grace under the Old Covenant was the Passover meal, and it foreshadowed the Sacrament of the Eucharist, which our Lord expressly connects with the eternal Marriage Supper (Mt. 26:29 and parallels). The centrality of feasting in the early Church is evidenced by her agapes or love feasts, and the observance of the “feasts” or “festivals” of the saints has been a vital part of Christian worship in all the historic confessional traditions.

The Religion of Dr. Johnson