Volume > Issue > With the Down & Out in Waterbury 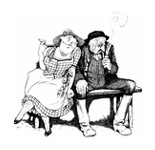 A CATHOLIC WORKER COMMUNITY IN THE BRASS VALLEY

By Tom Cornell | September 1993
Tom Cornell is currently working at the Peter Maurin Farm in Marlboro, New York, a part of the New York City Catholic Worker community. He is co-editor of A Penny a Copy, a book consisting of selections from The Catholic Worker.

It’s hard to write of our time in Water­bury, Connecticut. It’s hard because the lives of the people we Catholic Workers have lived among are hard, and because of our failures, real or apparent. How many lives are any better for our having been here? We have given many people food, clothing, shelter. Have we given them an idea?

Jeremy Brecher’s The Brass Valley: The Story of Working People’s Lives and Struggles in an American Industrial Region (Temple University Press, 1982) traced the development of Con­necticut’s Naugatuck Valley, with Waterbury its center. This is a history of the people who rolled brass, where they came from, how they lived, worked, worshiped, struggled, celebrat­ed, won, lost, died, and were buried in the years when Waterbury was the Brass Capital of the World. Brecher ought to update his book. The brass industry collapsed just over a decade ago. Antiquated plants and production methods lost the market to foreign competi­tion. Plants closed one after the other, and the Brass Capital of the World began to show signs of terminal tarnish. Then for a while there was a flurry of activity, with new construction, new banks, new office space. But after the construction was completed, the construction workers joined their fellows from the brass mills on the line at the unemployment office. Not much of the new office space was rented. Unemployment rose to 12 percent. A major bank failed. Bank officers went to prison, and so did the mayor and his closest cronies. A new administration plans to save the city with a new shopping mall.

“Quid aere perennius?” is Waterbury’s motto. “What is more lasting than brass?” The motto now stands in irony above the city shield in the Aldermanic Chambers in City Hall. It echoes the self-congratulation of Hor­ace, the first-century Latin poet. He called his poems “my crowning achievement, a monu­ment more lasting than bronze….” The an­cients knew little of brass, so aes may be either bronze or brass, and they knew less about modesty. Still, new editions of Horace are printed, but none of Waterbury brass, and Timex has left town. Waterbury has lost its raison d’être, and hasn’t yet found another. But the people who came to roll brass (Catholic ethnics) are still here, or their descendants. Others have come: African-Americans and Puerto Ricans, who are the poorest and live in “The Other Waterbury.”

We have watched all this from the sidelines. Ours has not been the society of movers and shakers, or of the workers, until they lose their jobs. Ours is a still lower stra­tum, that of the chronically unemployed and the unemployable. In the past 10 years we have cooked nearly three quarters of a million meals for Waterbury’s misfits. And we have not fit in very well either. One thinks of St. Paul, “and we are the off-scouring of all.”

The Motherhood of the Church

A good mother teaches her children but knows that her teaching will not be well received if she does not also love her children with a vigorous and gen­erous love.