Volume > Issue > With God in Russia 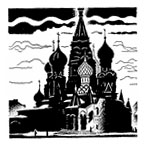 By Joseph P. Bonchonsky | November 2007
Joseph P. Bonchonsky is President of the American Byzantine Catholic Research Center in Mount Shasta, California, and author of The Other Catholics, Obedient and Faithful (available for $15 + $2.50 S&H from: ABCRC, 1334 Ramona Dr., Mt. Shasta CA 96067).

The 23-year journey of American-born Fr. Walter Ciszek, S.J., through the Soviet Union is a classic example of the efforts of the Jesuits who responded to Pope Pius XI’s call to go to the aid of the Russian Orthodox in the 1930s. The Soviets had reduced the Russian Orthodox priesthood from 57,000 priests in 1917 to 5,000 priests in 1939. A total of 146,000 religious (priests, monks, deacons, and nuns) had been decimated to 15,500 via the gulag archipelago. The deaths of tens of millions of obedient and faithful Russian Orthodox is a sacrifice in but one of Christ’s particular apostolic Churches.

Pius XI established the Russicum, the Pontifical Russian College, in Rome for the purpose of preparing Jesuits to go to the aid of Russia. The response was tremendous in that Jesuits came from England, Belgium, France, the U.S., etc., to train at the Russicum. Among the new vocations was Walter Ciszek.

Born in Shenandoah, Penn., in 1904, Fr. Ciszek is the only American Jesuit who responded to Pius XI’s call to return alive from the Soviet Union. He was imprisoned there for nearly 23 years — five years in the infamous Lubianka prison in Moscow and 10 years in the northernmost gulag archipelago in Siberia. An additional eight years found Fr. Ciszek restricted by the atheist Communists to the cities of Norilsk, Dudinka, Kras­noyarsk, and Abakan. Fr. Ciszek’s journey may be read in his two books With God in Russia and He Leadeth Me; the former details his earthly journey and the latter his spiritual journey. The travels of Fr. Ciszek are, in themselves, the story of what one man did to assist thousands of Russian Orthodox in their darkest hours. Twelve years after Fr. Ciszek’s death in 1984, the papers for his sainthood were delivered to Rome. His papers were prepared at the University of Scranton and the Byzantine Carmelite monasteries in Sugarloaf and Shenandoah. I had the honor of hosting Fr. Ciszek on a 30-lecture tour in southern California in 1964, two years after President John F. Kennedy exchanged a Soviet spy for Fr. Ciszek. It became readily apparent why the cause for his sainthood has advanced to Rome.

Fr. Ciszek is a heroic example of the brotherly act that the Roman Church extended to the Orthodox Church. The Russian Orthodox Church, in less than 800 years, became the largest Orthodox Church in the world. Her 54,000 churches, 550 monasteries, 450 convents, 61 seminaries, and 41,000 religious schools illustrate the depth and breadth of the Faith in Mother Russia prior to the atheist Communist revolution. That less than 500 fanatic atheist Communists succeeded in overthrowing a deeply Christian nation is a lesson to be remembered. Decades of poverty, unemployment, class differences, and misdirected national leadership provided a nation ripe for revolution. The history of 20th-century Russia is a study for all nations that position themselves for tyranny.