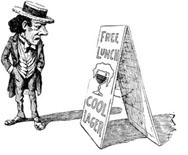 By Preston Jones | November 1998
Preston Jones teaches in the Department of History at Sonoma State University in California.

It was sadly predictable that the “prochoice” college student I was speaking with would be taken aback when she heard that in China and India female “fetuses” are being aborted simply because they are female. “Well, I’m against that,” she murmured. She knew she was supposed to think that abortion’s always okay but that discrimination against females is never okay. She was obviously perplexed by her dilemma, so I pushed the issue. She resorted to that most trusty of exit strategies: “It’s more complex than you think.”

I don’t deny that in the rough-and-tumble of daily life things are very complex. Nor do I doubt that many women agonize over their decisions to procure abortions. But I do wonder if the constant appeals to complexity that are used to stifle debate over abortion, and the regular denunciation of those who oppose abortion as right-wing fanatics, are usually offered in good faith. What was clear was that this young woman didn’t want to confront the moral quagmire she had stumbled into. But her evasion did nothing to change the question with which “prochoice” feminists must deal, which is this: Why is it wrong (as many feminists say it is) to abort for purposes of sex selection — i.e., to abort unborn female babies because they are female — and not wrong to abort unborn babies who just happen to be female?

Not surprisingly, some “prochoice” homosexuals are now asking themselves a comparable question. Consider the cover story in a recent edition of The Advocate, the “national gay and lesbian news magazine.” Suppose scientists find a gene linked to homosexuality, the article says, and suppose that gene can be detected in utero. Then what should homosexuals do if parents begin to abort fetuses who are genetically predisposed to homosexuality? The article puts it in these stark terms: “What are gays and lesbians going to do now to prepare for a time when a woman’s ‘right to choose’ becomes a hunting license to exterminate our kind?” The question is an important one, though I do wonder why the “prochoice” Advocate should be concerned about abortion only when it threatens their “kind.”

Of course, there are other “kinds” who can be targets of abortion — females, as already mentioned. But consider those who would be born into urban poverty. Some hard-core law-and-order conservatives have come close to advocating abortion as a crime prevention tool (the radio talk-show host Kenny Hamblin comes to mind). Kids born into places such as South Central Los Angeles are more likely to commit crimes, some say, so let’s encourage abortion in neighborhoods like that.

If you are anti-war and pro-abortion, and you won't recognize that you are making war on the unborn, you are not really anti-war.

The Road to Hitler Was Paved With Abortions

The Weimar Republic was distinguished by "the lowest birth rate in the Western world." Contraception was widespread and abortion laws were liberalized.