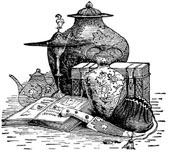 What’s Your Score on the S.A.T. (Salvation Aptitude Test)?

IF A LITTLE LEARNING IS DANGEROUS, HOW DANGEROUS IS NONE?

Ten years ago a college professor named E.D. Hirsch gained national notoriety for a radical thesis about education. In a book entitled Cultural Literacy he wrote that a basic purpose of education is to replace ignorance with knowledge. He argued that such fashionable educational concepts as “problem solving,” “critical thinking,” and “creativity” are empty if students possess no core of shared knowledge.

The passage of a decade — despite the birth of the so-called Information Age and the supposed building of the Information Superhighway — has only added support to his thesis. At every level of schooling, students are uninformed or ill-informed. There is illiteracy and innumeracy; there are science-stiffs and culture-clods. There is also — as parents of children in parochial schools are uneasily aware — a parallel Catholic phenomenon that as yet has no name. Should we call it “indogmacy”? In plain English, it is religious ignorance. American Catholic schoolchildren today know very little about their religion.

Last December I was chatting with an honor-roll eighth-grade student, my son’s classmate at the parish school. Noting that the boy was scheduled to serve Mass on the day after Christmas, I commented that, like Good King Wenceslas, he would be out and about on the Feast of Stephen.

“E.D. Hirsch, give me strength,” thought I. But then I reflected: It’s a mild case of Caroling Illiteracy, nothing serious. The lad may not be much of a singer, and, after all, Prague and its Wenceslas Square are rarely in the news these days, and, besides, the Bohemian prince and martyr’s feast day each September 28 is an optional memorial.

Then the boy said, “Who’s Stephen?”

He thought that over. “What’s a martyr?”

Protecting Our Children From Catholic Schools

A Question of Conviction

When sacrilegious art -- like a painting depicting the Virgin Mary wearing a G-string -- appears on a Catholic campus, what should be the proper response?