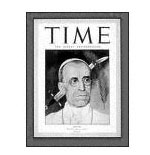 What Yad Vashem Reveals About the Jewish Sense of History

The above words, from Israel’s second prime minister, Moshe Sharett, represent an almost typical gratitude expressed by Jews in the immediate aftermath of the Second World War. From Golda Meir to the chief rabbis of Europe and even Israel itself in the 1940s and 1950s, Pope Pius XII was held in high esteem for his work against Nazism and in saving the lives of hundreds of thousands of Jews. He was mourned in 1958 as, in the words of Golda Meir, “a great servant of peace,” who Graham Greene estimated “will rank amongst the greatest.” Yet the reputation of Pope Pius XII today — he has been slandered as “Hitler’s Pope” — stands in sharp contrast to Time magazine’s portrayal of him in 1958 as a “great pope” to “men of all faiths.” The exhibit at Jerusalem’s Holocaust memorial, Yad Vashem, is indicative of this negative view of Pius XII. The late pontiff is depicted as someone who did nothing to save Jews and was thus complicit by silence in the Nazis’ murder of millions of Jews in the Holocaust.

Rory McCarthy, writing in London’s Guardian (May 7, 2009), describes it as one small exhibit among hundreds, easily overlooked. As the visitor walks about halfway along the large, angular walls that house Yad Vashem’s History Museum, he will find two black-and-white photographs of Pius XII. The first shows the Pope seated, flanked by what seem to be church- and statesmen, signing what might be the famous 1933 Concordat with Germany. The second simply shows a very still-looking Pius, seated in what appears to be his papal throne. The images certainly convey a sense of silence and stillness but, more significantly, collusion with the state that forms the crux of his damnation in the judgment of many contemporary scholars. The photos, however, are less significant than the adjoining text. Atop, in prominent script, is a poem by Nathan Alterman, which reads:

While the ovens were fed by day and by night,
The Most Holy Father who dwells in Rome
Did not leave his palace, with crucifix high,
To witness one day of pogrom.
Just to stand there, one day,
Where the child-lamb is standing, each day anew
The anonymous Child of a Jew.

Both the source and date are given: From All People, 1942. The date is significant in that it gives the impression that it is based on the experience of a Holocaust survivor when in actuality it was written in faraway Palestine. It is, in fact, a work of imagination. The experience of the Holocaust might differ significantly for one of the hundreds of thousands of Jews who, in the darkest hours of Europe, saw in the Church a chance for hope and, in so many instances, found it. The poem highlights the difference in perspective between those who experienced the Holocaust and those who learned about it from a distance of time or space or both. Of course there are critical voices from firsthand survivors as well, but this conception might be useful in comparing the understanding of Pius XII in 1958 and today.

The remainder of the exhibit consists of a text written in both Hebrew and English. According to Yad Vashem spokeswoman Iris Rosenberg, “The Holocaust history museum presents the historical truth on Pope Pius XII as is known to scholars today.” But this is disingenuous. The exhibit does not represent “historical truth,” nor does it attempt a balanced reflection of a contentious history. It is, rather, a representation that fits into a particular reading of history.

The 23-year journey of American-born Fr. Walter Ciszek, S.J., through the Soviet Union is a…

The land of what if is a poignant place from which to contemplate the Holocaust,…