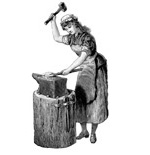 THE VIEW FROM WAY DOWN IN THE PEW

The Lord told Moses, “…I will send an angel before you to the land flowing with milk and honey. But I myself will not go up in your company, because you are a stiff-kneed people; otherwise I might exterminate you on the way. When the people heard this bad news, they went into mourning…” (after Exodus 33:1-4).

There are many perceived divisions among Catholics in America. And there is one division that has not, so far as I know, been perceived at all. Whether it warrants attention, you may judge for yourself. I refer to the split between Pedalists and Manualists.

Picture an ordinary Catholic who comes into church, enters a pew, and prepares to kneel. If the kneeler in the pew has been swung up off the floor, it must be brought down into the ready position. Some worshipers achieve this manually, by reaching down, grasping the kneeler in one hand, and lowering it to the floor. Others proceed pedally: They stand straight up, place one foot beneath the kneeler, lift, and swing the kneeler gently down.

I’ve seen no editorials in the conservative Catholic press praising Pedalism, no articles in liberal Catholic magazines maligning Manualism. The lack of Catholic punditry on the matter is understandable, for it’s not clear where the usual labels or libels (Traditionalist, Modernist, Liberal, Restorationist) would apply. Both Pedalism and Manualism can be observed in practice within a single parish community — in fact, within a single family in a single pew — with no signs of friction, or even of awareness.

Emotionalism or Ritualism - Or the Best of Both?

The liturgy does not try to create or evoke emotions but expects them to grow from our recognizing and feeling the truths the ritual expresses.

Heaven is often compared to a lavish banquet. But somehow we can't imagine that it involves toilet paper and balloons.