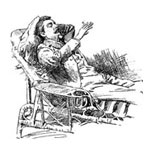 LIVING IN THE YARD WON'T DO

By David Mills | October 2014
David Mills, a Contributing Editor of the NOR, has edited both Touchstone and First Things. He writes a column called "Catholic Sense" for the Pittsburgh Catholic and other diocesan newspapers, and a weblog for Patheos (www.patheos.com/blogs/davidmills). His most recent book is Discovering Mary.

Some Catholics speak of sharing their faith with others as if being a Catholic were secondary and relatively unimportant, as if by being or becoming any sort of Christian a person has arrived home. I’ve heard this from Catholics of all sorts, often in reaction to something I’ve written on apologetics. Catholics have told me they would not even think about discussing Catholicism with their evangelical friends, whose faith they believe to be complete as is. I have been told twice, once by a very conservative priest, to beware of “Catholic chauvinism” because I’d suggested that, all things considered, being a Catholic is better than not being a Catholic. A goodly number of Catholics have disparaged even the idea of arguing for the Church, explaining that Catholics should witness by the way we live and that arguments will only drive people away. Some have even suggested that the Church “forbids us to proselytize,” defining the word very broadly.

Others make the point indirectly, for example by reacting to a statement in favor of Catholicism by declaring the virtues of Christians outside the Church, as if a statement in favor of Catholicism were automatically a criticism of everyone else. One man told me, probably without realizing how he was patronizing the Protestants he was defending, to “let sleeping dogs lie” because by promoting Catholicism one could unsettle their faith in Christ.

Then there are Catholics who have gotten to know serious Protestant believers, especially evangelicals, and have been so impressed by their faith that they feel inadequate playing up the Catholic distinctives. It’s like giving St. Francis of Assisi lessons on friendship with the poor. Others feel happy just to have such friends in the world: people who love the Lord and observe the moral law, which some of their fellow Catholics don’t do. They don’t feel right in pressing Catholicism upon such people, feeling that if it ain’t broke, don’t fix it.

Some Catholics who think like this know that certain aspects of Catholic teaching and practice will put off even the sympathetic, and even more those who might over time gain sympathy for the Church. These Catholics hope that people who genuinely meet our Lord and grow to know Him more deeply through their churches will come, some day, to enter His Church, as indeed does happen. (It happened to me.) They offer people what stores call a “loss leader,” selling something for less than it costs in the hope that once people get inside the store they’ll buy more than they intended. It’s like giving kids classic comics in the hope that someday they will want to read Homer and Virgil and Dante, or expensive grape juice in the hope that they’ll learn to appreciate fine wines.

Since all that was valid about the “Reformation protest” has been accepted by the Church, it is time for Protestants to “come home.”