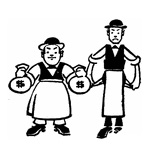 By Gregory Sampson | March 2010
Gregory Sampson, ordained a deacon of the Diocese of Sioux City in 1992, serves in Carroll, Iowa. His service to the Church includes hospital and prison ministry. Prior to his move to Iowa, he was a functionary with the Eastman Kodak Company.

One of the most memorable scenes in George Bernard Shaw’s 1913 play Pygmalion is the encounter between Professor Higgins and a conniving dustman named Alfred Doolittle. “I’m one of the undeserving poor: That’s what I am,” intones Doolittle. “Think of what that means to a man. It means that he’s up against middle-class morality all the time. If there’s anything going, and I put in for a bit of it, it’s always the same story: ‘You’re undeserving; so you can’t have it.'”

Doolittle expands on this theme, emphasizing that his needs as a member of the undeserving poor are not less than those of his more deserving counterparts. “I need more,” he claims. “I don’t eat less hearty than him; and I drink a lot more.” Shaw inserted this bit as comic relief — a disreputable scrounger advancing the cause of the undeserving poor. Audiences saw the apparent irony of it, and they chuckled. In fact, the scene was included, with little alteration, in the musical version of Pygmalion, the popular Broadway hit My Fair Lady.

It can be hazardous to take a serious look at something intended as a piece of comedy, but it just might be that Doolittle’s bold defense of the undeserving poor is worthy of a bit of reflection. It is unlikely that Shaw, a committed utilitarian atheist, was consciously setting forth a principle of Christian charity. From his point of view, the idea that the undeserving poor should be treated on par with their more worthy counterparts is laughable — and contributes to the comedic impact of the scene. But perhaps his shabby and devious character Doolittle really did hit on an important Christian principle, albeit in a wildly twisted and self-serving way.

So we find it amusing when Doolittle insists that generous people should not discriminate against his kind. But perhaps we ought to ask whether Doolittle might be correct. Practical men might offer a quick answer: “No. Doolittle is incorrect. Resources are finite. If we help the undeserving, then it means less for the deserving, and that would be a violation of justice.” That certainly sounds right. Ten thousand practical reasons could be given for concentrating our efforts to assist the deserving poor. As for the undeserving poor, well, they don’t deserve anything — by definition.

We Did This to Him

We have no license to complain about what the Jews or Romans did to our Lord; we have no right to stand outside and tsk-tsk what others did.

Review of Not the Way It's Supposed to Be: A Breviary

What Is More Dangerous: Smoking or Homosexuality?

According to a recent study, engaging in homosexual behavior reduces men's lifespan by 24 years in Norway and Denmark.