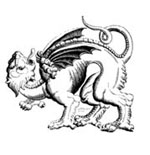 By Mark McMenamin | July-August 2015
Mark McMenamin is Professor of Geology at Mount Holyoke College where he has taught since 1984. His geological and paleontological interests range from Precambrian supercontinents to Pleistocene hominins such as Homo tsaichangensis. He lives with his wife, Dianna, in South Hadley, Massachusetts. The two are slated to become grandparents when their oldest daughter, Sarah, gives birth in August.

When Thor’s Oak came crashing to the ground circa A.D. 723, thanks to St. Boniface’s quick work with an axe and some help from a miraculous blast of wind, the pagans of Geismar finally bowed to the inevitable and converted to Christianity. Their sacred oak was no match for Boniface’s zeal, and it seems quite appropriate that the resulting lumber pile provided the raw material for a church and monastery honoring St. Peter, today the site of St. Peter’s Cathedral in Fritzlar. Boniface’s next big theological challenge, however, was not from pagan worshipers but from a fellow evangelizer who, like Boniface himself, had left the British Isles to convert the heathens in what is now Germany and Austria.

St. Virgil of Salzburg, the evangelizer of Carinthia, is styled in The Avenel Dictionary of Saints as a “somewhat difficult character,” and this may be putting it mildly. Boniface had several run-ins with Virgil that required papal intervention. In one of these clashes, Boniface complained to Pope Zachary that Virgil opposed Scripture by claiming that the earth was round. You can almost hear Zachary’s sigh of exasperation as he mediates yet again between the two saints: “If it shall be clearly established that he professes belief in another world and new people existing beneath the earth’s surface, or another moon or sun down there, then you are to convene a council, strip him of his ecclesial rank, and expel him from the Church!”

Virgil managed to clear himself of the charges, and no sanctions were applied. His concept of a rotund earth, possibly derived from the adventures of St. Brendan the Navigator, was, however, only part of the problem. Virgil also questioned the doctrine of original sin and the universality of redemption. He argued that if there were “other lands” and “other men” under (on the other side of) the earth — namely, if the opposite side of the earth (the “Antipodes”) were habitable — then this posed significant practical problems for evangelization, particularly if impassable geographic barriers separated the peoples. Such barriers were considered a real possibility — the Roman geographer Mela had argued that unbearable temperatures in the equatorial zone rendered it impossible to reach people on the opposite (southern) half of the globe. Virgil’s inferences about people on the far side seemed to imply polygenism, for how could these separated folk possibly be descendants of Adam and Eve? Would they not thereby be exempt from the taint of original sin? Partial truths, particularly of the scientific variety, can be theologically treacherous.

This curious episode in Church history serves as a sort of prefiguration of the controversy that follows the writings of Jesuit geologist and paleontologist Pierre Teilhard de Chardin. Like Virgil, Teilhard took issue with the concept of original sin, eventually leading to Teilhard’s censure by the Vatican and his banishment from France. It is worth examining the parallels between Virgil and Teilhard. Virgil wondered how original sin could apply in far?distant continents populated in separate acts of divine fiat. Thanks to scientific advance (the “out-of-Africa” model is the current consensus), we now believe that all people are in fact descended from common ancestors living some 150,000 years ago. This concept of species monogenism is well-supported by scientific findings and, like the Big Bang theory, is in accord with traditional Church doctrine.

Fundamentalists Inside The Catholic Church

When I teach that the Earth is 4 to 5 billion years old, I am not contradicting any currently defined Church doctrine or giving credence to Darwinian evolution.

In a statement to the Pontifical Academy of Sciences on October 22, 1996, the Pope…

The phrase “evolution is a fact, not a theory” seems to emerge from the same realm of the human psyche that gives us “my country right or wrong.”