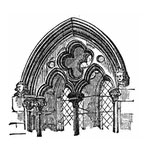 A HISTORY OF SPLITSVILLE

By William J. Tighe | December 2022
William J. Tighe, a Contributing Editor of the NOR, is Professor of History at Muhlenberg College in Allentown, Pennsylvania. He is a Senior Editor of Touchstone: A Journal of Mere Christianity.

Ed. Note: As we close our commemoration of the NOR’s 45th anniversary of continuous publication, we present our contributing editor William J. Tighe’s retrospective of a key moment in the history of our apostolate: The St. Louis Congress of 1977. This watershed event, at which the Continuing Anglican movement was inaugurated, was a major factor in the NOR’s eventual decision to abandon the chaos of Anglicanism for the calmer climes of Roman Catholicism. The issues that led to a massive splintering of Anglicanism in the wake of the Congress will seem all too familiar to Catholics of today. Yes, at this remove, we can hear the rumblings of the same type of chaos in the Catholic Church — chaos that could reverberate throughout Holy Mother Church if the forces of Catholic orthodoxy (which are sustaining heavy damage under the reign of Pope Francis) are unable to withstand the assaults of theological liberalism, as happened to the forces of “Anglican orthodoxy” 45 years ago.

From September 14 to 16, 1977, a group of nearly 2,000 Anglicans from around the world, but mostly from the United States and Canada, gathered in St. Louis, Missouri, to discuss how to respond to the fall into liberalism of the Anglican Church of Canada (ACC) and the Episcopal Church (TEC; until 1964 the Protestant Episcopal Church in the United States of America, or PECUSA). This fall was symbolized, above all else, by the acceptance of the ordination of women to the priesthood, in Canada in 1975 and in the United States in 1976, after years of contentious debate. At the time, I was a wavering Catholic, strongly tempted to become an Anglican and effectively living as one — how and why I did not leave the Church but, rather, recovered a full faith in Catholicism by 1982 is another story — and so I followed closely the debates about “orthodox Catholic Christianity.”

In early 1977 I became aware of a publication called New Oxford Review, continuing The American Church News. (The American Church News had been an old Anglo-Catholic clerical newsletter.) Within a few months it became simply New Oxford Review. (The publication’s own “conversion” to Catholicism had to wait until 1983.) I subscribed immediately, went on to order the few back issues I had missed, and still have in my possession a paper copy of every issue of the NOR, the only serial publication of which I can make this boast!

In its May and June 1977 issues, the NOR publicized the forthcoming St. Louis Congress. The September issue featured one article detailing the purpose of the Congress, and another on why “Catholics” (meaning Anglo-Catholics) who advocated remaining within the ACC or TEC and “fighting from inside” were fighting a losing battle. The author of the second article, Robert C. Harvey, was remarkably prescient of future developments in TEC and the ACC, including the marginalization and eventual elimination of “orthodox opposition” to women’s ordination, and the triumph of unconditional “gay inclusion.” Harvey (1916-2014) was a priest in TEC at the time and subsequently a priest, then bishop, in the Continuing Anglican movement that grew out of the Congress.

The entire October 1977 issue of the NOR was devoted to the Congress. It included “The Affirmation of St. Louis” issued by the Congress, and its four plenary addresses. The November and December issues featured follow-up articles or reports.

The Congress’s 45th anniversary is an apt occasion for a retrospective on an event which, if its results fell far short of its constituency’s expectations, was intimately associated with the development of this magazine.

The view that one can find encouragement in the writings of the Catholic Newman for the reunion of Churches is a mighty myth.