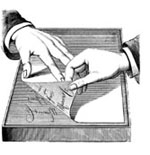 In Chicago during the tumultuous year of 1968, a group of about 40 activists gathered to protest the slow pace of public-school integration in the city. The protestors, including comedian-turned-mayoral-candidate Dick Gregory, believed that school superintendent Ben Willis was dragging his feet, and that powerful mayor Richard Daley could take steps to make Willis do the job quicker. Carrying signs, chanting, and singing songs, the group marched from Grant Park to City Hall and then to Mayor Daley’s home some five miles away in a quiet residential neighborhood.

The protestors arrived at Daley’s house about 8 PM and continued marching, singing, and chanting until 9:30. As they did, a crowd of hecklers gathered to shout them down. Some began to throw rocks and eggs. The marchers refused to respond with similarly aggressive activity and continued their constitutionally protected marching and singing. The police who escorted the protest had acted admirably to protect the marchers throughout the event, but now they feared a riot. The lieutenant in command asked Gregory and his marchers to leave. When they refused, the police arrested the marchers — not the hecklers. Gregory was later convicted under Chicago’s disorderly conduct ordinance.

The Supreme Court unanimously overturned the conviction in Gregory v. City of Chicago, a decision best known for Justice Hugo Black’s concurring opinion in which he attacked this kind of “heckler’s veto.” Black recognized that a city could issue prospective ordinances to regulate the time, manner, and place of protests, including outlawing marches in residential neighborhoods after dark. But Chicago did not have such an ordinance. The disorderly conduct ordinance used to convict the marchers was so broad and deputized the police with such power that, in Black’s words, it made the city’s government “one of men, rather than of laws.” The marchers were arrested and convicted solely because they had disobeyed the police command to leave in the face of aggressive and unlawful action by hecklers, and not due to any act they themselves had committed. This did not pass constitutional muster.

Although Black himself did not coin the phrase, the idea that the government cannot enforce a “heckler’s veto” has gained significant force in First Amendment law. In the strict legal sense, it is not the heckler who vetoes a person’s right to free speech by shouting him down, though the term is often used today to mean that; rather, it is the government that vetoes free speech by silencing the speaker out of concern for the safety of others, which might be compromised by the heckler’s disruptions. Since the 1960s courts have held time and again that while the government can impose reasonable restrictions on the time, place, and manner of political speech in the name of public safety, it cannot prohibit that speech merely because it is likely to cause offense to others who might then react in a way that causes harm.