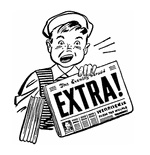 The Role of Catholic Media Today

WHEN WORDS NO LONGER MAKE SENSE

By Gregory R. Erlandson | March 2011
Gregory R. Erlandson, who has worked in the Catholic press for more than thirty years, has for the past ten served as President and Publisher of Our Sunday Visitor, a Catholic publishing company of books, curricula, and the largest Catholic newsweekly in the U.S. This article is adapted from an address he gave to the Catholic Press Congress in Rome on October 4, 2010.

There is an old joke applicable to the Catholic media apostolate: How does one make a small fortune in the Catholic press? Start with a big fortune.

Ours has been a challenging field since the changes and divisions that followed the Second Vatican Council, but most certainly since the 1990s. In the United States, Mass attendance, attendance at Catholic schools, the number of priestly vocations, marriages, baptisms, and more have all drifted lower. Most surveys suggest that Catholic practice is in decline, but the large influx of primarily Catholic immigrants from Mexico and other Latin American countries has kept our numbers relatively stable.

On the surface, Catholic media remain quite vital. There are an estimated three hundred Catholic print publications available today, including four major national weekly papers, one hundred forty diocesan newspapers, more than a hundred magazines and major newsletters, as well as publications in Spanish and other languages. There are dozens of Catholic book publishers, one major Catholic television network, EWTN, and more than one hundred sixty Catholic radio stations.

But appearances can be deceiving.

Most of the mainstream Catholic publications have been under great financial stress, and those not owned by dioceses have generally seen a decline. Diocesan newspapers often benefit from a circulation mandate of some sort, by which the diocese compels the purchase of its newspaper, but we are seeing a decline there as well, in circulation, frequency, or both.

A Loose Cannon on the Barque of St. Peter

A loose cannon is not the worst thing that can happen on board the Barque of St. Peter. False pilots are more dangerous.

Rising from the Mire

A review of Real Music: A Guide to the Timeless Hymns of the Church

Letter to the Editor: December 1998

Why Attack Us?... Why Latin Is Hated Today... Brave German Clergy... Automatically Excommunicated?... Strong, But Not Ugly...