Volume > Issue > The Rise of the "All-Conquering Female" 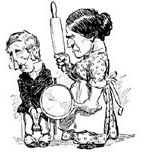 The Rise of the “All-Conquering Female”

By Robert Barron | March 2017
Robert Barron is Auxiliary Bishop of the Archdiocese of Los Angeles and the founder of Word on Fire Catholic Ministries.

Two recent films, Deepwater Horizon with Mark Wahlberg and Sully starring Tom Hanks, represent something of a breath of fresh air, for both movies feature men who are intelligent, virtuous, and quietly heroic. If this strikes you as a banal observation, that just means you haven’t been following much of the popular culture for the past twenty years.

One of the distinctive marks of films and television programs over the past couple of decades has been the Homer Simpsonization of men. Don’t get me wrong: I’m a big fan of The Simpsons and laugh at Homer’s antics as much as the next guy. But the father of the Simpson family is stupid, boorish, drunk most of the time, irresponsible, comically incompetent, and childish. In the same cartoon world, he is echoed, of course, by Family Guy‘s Peter Griffin, who is similarly buffoonish. In both cases, the wives — Marge in The Simpsons and Lois in Family Guy — are the ones with the brains, the competence, and the moral responsibility. In The Simpsons, Homer is imitated by his son, Bart, who is sneaky, stupid, and unmotivated, and Marge by daughter Lisa, who is hyper-smart, uber-competent, and morally alert. In one memorable episode, Lisa is worried that she has inherited her father’s terrible qualities but is relieved to discover, by the show’s end, that the “stupid gene” is communicated only to the males in the Simpson line. In another of my favorite Simpsons scenes, Homer is told, at a moment of moral crisis, to consult that “little voice that tells you right from wrong,” and he responds, “You mean Lisa?”

If you think this male-bashing is restricted to cartoons, think again. Ray Romano’s character in Everybody Loves Raymond, Ed O’Neill’s hopeless father in Married with Children, and Ty Burrell’s hapless goofball in Modern Family are all variations on the Homer Simpson theme. Add to this the presentation of fathers as not just inept but horrific in Game of Thrones, and the absent, indifferent fathers of Stranger Things.

And I wonder whether you’ve noticed a character that can be found in practically every movie made today? I call her the “all-conquering female.” Almost without exception, she is underestimated by men and then proves herself more intelligent, cleverer, more courageous, and more skilled than any man. Whether we’re talking about a romantic comedy, an office drama, or an adventure movie, the all-conquering female will almost inevitably show up. And she has to show her worth in a domineering way — that is to say, over and against the men. For her to appear strong, they have to appear weak. For a particularly good case in point, watch the recent Star Wars film, The Force Awakens.

It was from her 17-year experience in Africa that Karen Blixen, under the pen name of Isak Dinesen, wrote her highly acclaimed stories of Africa.

The Prison of “Freedom”

Rohmer’s films are uniquely cinematic, bearing the mark of his simple visual style and nuanced out­look on and delicate treatment of human relation­ships.