Volume > Issue > The Rise of the Abortion Party 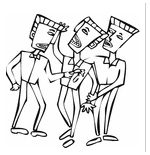 The Rise of the Abortion Party

By James M. Thunder | November 2010
James M. Thunder, a Washington, D.C., attorney, has served as general counsel of Americans United for Life. His 2003 article in Issues in Law & Medicine, titled "Quiet Killings in Medical Facilities: Detection and Prevention," resulted in interviews in newspapers and on television and radio. He is a regular contributor to The American Spectator (www.spectator.org) and Spero News (www.speroforum.com).

Suppose that, in the 1960s, several hundred Americans in favor of overturning the conventional prohibitions on abortion established a new political party. To highlight its distinct platform, they unabashedly named it the Abortion Party. The new party attracted a lot of attention and a fair amount of money. Party members organized in several states and worked diligently and successfully to change the laws of those states. The party fielded candidates and a few won office.

At this juncture, several Catholic bishops suggested to each other in private meetings that they publicly forbid Catholics from joining the party, contributing to the party, or voting for the party’s candidates. The majority of Catholic bishops counseled against taking this action. They said times were different now — no longer do we publish lists of forbidden books, forbidden movies, and forbidden organizations like the Masons. It was, they said, pastorally prudent under the current circumstances to educate the faithful rather than command them. They expressed their firm belief that, over time, this third party would, like all third parties in American history (except the Republican Party) wither away.

Shortly thereafter, the U.S. Supreme Court issued its decision in Roe v. Wade, making abortion legal in all fifty states, at all times of pregnancy, and defining maternal health so broadly as to offer no limitation. Having won this unexpected victory, the National Committee of the Abortion Party met to devise plans to defeat any attempt to amend the Constitution to overturn the decision, to defeat any attempt to limit abortion, and to enlarge its membership and enhance its chances of becoming a leading political party.

In the ensuing thirty years, the Abortion Party did grow. The number of people voting in its primaries grew exponentially. The number of party officeholders expanded and eclipsed all other third parties in U.S. history (except the Republican Party). The party expanded its platform to address the entire spectrum of public-policy concerns. The commitment to “abortion rights” and related issues, however, remained its raison d’être.

The authors say abortion is "like pruning one's rose bush." Pruning a rosebush makes it bloom more abundantly. But when one aborts a child, does her capacity to grow improve?