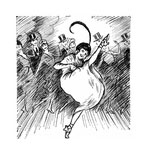 By Arland K. Nichols | November 2011
Arland K. Nichols is the National Director of HLI Amer­ica, an educational initiative of Human Life International. He can be reached through www.hliamerica.org, where his recent articles published in HLI America's "Truth and Charity Forum" can be read.

For many reasons I do not often watch television. Don’t get me wrong: I used to do so frequently before my wife encouraged me to do something more productive with my time. Nevertheless, a while back, I found myself desperate for a “brain break.” Expecting a few minutes of decompression, I flipped on the tube to surf the seven stations we receive with our rabbit-ear antennas, and settled into an episode of America’s Got Talent.

Now, I’m not one who is easily shocked, but I was certainly surprised by what passes for “talent” in America today. This particular episode featured a man in his mid-twenties who introduced himself as a “polefessional,” a term apparently meant to dignify what was once considered a desperate, shame-ridden attempt to wring a living from the depravity of others — namely, stripping. In this case, the term was self-applied by a man dressed in high-heels and minimal silver shorts, whose torso was covered with glitter paint, and who danced provocatively to the delight of the crowd. To my further dismay, this act was performed on what is purportedly a “family show” aired during prime time. This type of “family entertainment” makes one wonder what constitutes family life for the show’s producers.

The mainstream media’s bias in support of homosexuality is no secret. And here was a clear, unabashed example of it. Television executives, cajoled by activist organizations like the Gay and Lesbian Alliance Against Defamation (GLAAD), have for years participated in an orchestrated campaign to normalize homosexuality. Before this episode of America’s Got Talent aired, the GLAAD blog, “TV GAYED,” exclaimed, “Let’s hope pole-dancing sensation, Steven, will make it to the next round.” Sure enough, he was advanced to the next round of the competition held, appropriately, in Las Vegas — a city where “sin” is reduced to a mere moniker. If it did turn out that the producers of this show were consciously pushing in-your-face homosexual performances, it would hardly be surprising. After all, we know that homosexual activists rate major television networks on how “gay friendly” they are. GLAAD itself publishes a “network responsibility index,” which asserts that “images of multidimensional gay and transgender people on television have the power to change public perception.” The television networks that are deemed the least “friendly” are threatened with boycotts and the potential loss of advertising dollars, which is a real threat because, as GLAAD notes, “the buying power of gays and lesbians was projected to exceed $835 billion by 2011.”

While these trends in the media have been well documented, what was most disturbing was the reaction of the crowd. The audience was, it seemed, composed primarily of teenage and preteen girls, who gave raucous and thunderous support to Steven until the third judge finally gave his sign of approval, giving the young man a pass to Sin City. I have never heard a crowd back a contestant as strongly as this one did that night. In comparison, the adulation of Sanjaya and his hair on American Idol a few seasons ago was tepid. This crowd absolutely loved Steven and his polefessionalism. One wonders: Where are their parents?

On Our Fascination with Royalty

The advertising industry in this country has become a near-faultless barometer of the American character.…