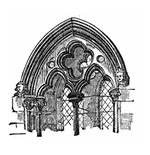 Not too long ago I received a copy of a history of the sixteen Polish parishes in Milwaukee. It is a tremendously moving story of how the poorest of the immigrants from Europe built the most spectacular churches, at incredible cost. The Basilica of St. Josaphat, most imposing of the structures, at one time boasted the second largest dome in the nation after the U.S. Capitol Building. The people who built it were the most despised of the European immigrants, taking dangerous and unsavory jobs no one else would take, huddled in crowded conditions. And yet the parishioners of that parish took out second mortgages on their homes, and contributed up to a year’s factory wages, in order to build the church to the glory of God.

It is said that when the Germans came to Milwaukee they built factories, and when the Polish came to Milwaukee they built churches. The church was at the very center of the life of the Polish community. And soon there were schools — grammar and high schools — and benevolent institutions, orphanages, and cultural organizations, including an opera company.

This is only Milwaukee. There are a dozen cities, mostly the Lake Cities — Chicago, Detroit, Buffalo — where more or less the same phenomenon occurred. And then a hundred other small towns and villages, from Texas to Nebraska to New England, where coal miners, farmers, and other working folk gave their best to the Church, which had been their spiritual home for a millennium.

In the nineteenth century, a great crisis erupted in the American Catholic Church. It centered around the issue of who would control the churches. Called the “Trustee Controversy,” the issue of church ownership was aggravated by the practice of the American Church hierarchy of removing Polish pastors from their immigrant flocks and imposing non-Poles as the leaders of those flocks. This was especially painful in a city like Milwaukee where the Church leadership was German; the Poles had immigrated from Prussia, fleeing German cultural oppression. (Poland had been partitioned a century before, between Prussia, Russia, and Austria, so no one came from Poland in “the Great Immigration” since that country did not exist.) The Poles were seen as fractious and quarrelsome, in America as in Europe; in other circumstances, this characteristic was lauded as “freedom-loving.” To wit, a fairly recent history of the Archdiocese of Milwaukee, commissioned by former Archbishop Rembert Weakland, describes them as “intractable.” The Poles, for their part, felt that, because by the 1920s they constituted twenty percent of the American Catholic Church, they should have at least some representation in the hierarchy. That representation was very late in coming, too late for the members of the Polish National Church, who had gone into schism by the turn of the nineteenth century.

Covenant of Love: Pope John Paul II on Sexuality, Marriage, and Family in the Modern World... Studies and Commentaries: 1984... He Came Down From Heaven... The Forgiveness of Sins... The Culture of Consumption

The Pope's Duck-Billed Platypus... The War We Wage...

Letter to the Editor: February 2002

Has the "Holy Cross" In Holy Cross College Been Crossed Out?... Expose the Works of Darkness... Stolinsky's Thesis Confirmed...