Volume > Issue > The Pledge of Allegiance: What's All the Excitement About? 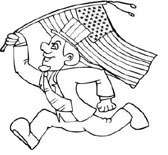 The Pledge of Allegiance: What’s All the Excitement About?

By Anthony L. Gerring | November 2002
Anthony L. Gerring, a Catholic convert from the Lutheran Church-Missouri Synod, writes from Michigan where he and his wife live with their four children.

On June 27 the 9th Circuit Court of Appeals of the U.S. declared that the Pledge of Allegiance to the U.S. flag is unconstitutional in public schools because it includes the words “under God.” In the weeks and months since the story broke, shock and outrage have swept through the country and the highest offices in the land. In a 99-0 vote, the Senate passed a resolution “expressing support for the Pledge of Allegiance” and asked the Senate counsel to “seek to intervene in the case.” President Bush called the Court’s decision “ridiculous.” And the Justice Department weighed in on the issue by arguing that the Circuit Court failed to consider prior Supreme Court rulings when it made its own ruling.

Faithful Catholics have for the most part agreed with the Senate, the President, and the Justice Department. Many have cited the fact that the Knights of Columbus were instrumental in getting the phrase “under God” added to the Pledge of Allegiance in 1954. Deacon Keith Fournier, a long-time Catholic political activist, issued a strongly worded press release condemning the Circuit Court’s decision. And the Thomas More Center for Law and Justice in Ann Arbor, Mich., offered free legal counsel to any school denied the right to permit students to recite the Pledge of Allegiance with the words “under God.”

However, the Pledge of Allegiance is a more complex issue than most Catholics realize. In essence, the Pledge is a creed, a statement of faith about America, and it behooves Catholics to think well about the creeds they profess. (Catholics have always believed that idle, careless words are often sinful and are better left unsaid.) As a creedal statement, the Pledge consists of words that have become a fixture of America’s civil religion. The words of the Pledge are not supposed to be emotive fluff, but are intended to have real, objective meaning.

Now consider the words of the Pledge of Allegiance: “I pledge allegiance to the flag of the United States of America, and to the Republic for which it stands, one nation under God, indivisible, with liberty and justice for all.”

Archbishop Levada: Call Your Office!... An Embarrassment of Martyrs... An Inexplicable Apology... Monkey See, Monkey NOT Do?