Volume > Issue > The New Totalitarianism: Forcing People to Be Tolerant 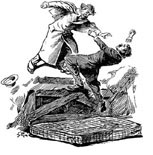 The New Totalitarianism: Forcing People to Be Tolerant

On a cold night early in 1998 a college freshman in Wyoming decided to engage in one of his periodic bouts of very hazardous behavior. He went out cruising the bars looking for rough sex with a male stranger or strangers. From a bar, the youngster went off into the night with two men who pistol-whipped him, robbed him, and left him tied to a fence by the side of a road. He died some days later in a hospital. The young man’s name was Matthew Shepard. Shepard’s parents instantly found themselves, their dead son, and their grief being exploited to publicize what the activists endlessly interviewed by the media announced was rampant anti-homosexual bias in American culture. His father told the thronging media that the death of his misguided and unfortunate son should not be so used. But the opportunity for exploitation was irresistible, and Shepard was made the poster-boy for a campaign to write into law a special protected status for homosexuals. This campaign had already been vigorous, and Shepard’s iconic murder turned it positively frenzied. The ever-opportunistic Bill Clinton appeared on television to condemn “gay bashing” and to demand new federal and state laws to combat it. He expressed perfectly the wishes of the liberal elite who intend to blanket the country with laws that will punish such “hate crimes.”

As of this writing, 40 states and the federal government have enacted laws intended to punish what are described as hate offenses — an ambiguous term used to specify any crime deemed motivated by various kinds of prejudice or bias — and 21 states consider crimes deemed motivated by hostility to homosexuality as “hate crimes.” To be found guilty of a hate crime means additional punishment. According to the 1998 book Hate Crimes, Criminal Law and Identity Politics by James Jacobs and Kimberly Potter, the appearance of hate statutes is the result of a well-financed public relations campaign waged on an unsuspecting citizenry. The authors, two legal scholars from New York University, also contend that anti-hate statutes do not in fact lessen actual prejudice. Instead they tend to weaken the First Amendment protections of the Constitution. Claiming to strengthen human rights, they do the opposite, by attempting to criminalize thoughts and feelings.

The argument that “hate laws” criminalize thoughts was heard by the U.S. Supreme Court in the case of Todd Mitchell, a teenager convicted in Wisconsin of committing aggravated assault. He received the maximum two-year sentence for the assault, but under the new Wisconsin hate-crime law five years were added to his sentence. His lawyers appealed, and eventually the Wisconsin Supreme Court struck down the added five-year penalty, stating that the lower court’s decision “creates nothing more than a thought crime,” which it rejected as an “Orwellian” concept. But in 1993 the U.S. Supreme Court reversed the state supreme court. The nation’s highest court voted 9-0 to uphold the hate-crime concept.

The earliest efforts to classify certain bias-based offenses at the federal level began in 1985 with hearings prompted by lobbying from several civil-rights groups that led to the passage of the Hate Crime Statistics Reporting Act. Next, the House Judiciary Committee was urged by Rep. Barney Frank, an openly “gay” congressman, to include crimes against homosexuals in the statistics. In 1986 the House of Representatives held hearings to “sensitize the public to the…prevalence of anti-gay violence.” This was the first action by Congress toward recognizing homosexuals as a privileged minority group.

Dodge ball has been targeted for extinction in two public school districts.