Volume > Issue > The Nature of Satan & the Church's War Against Him 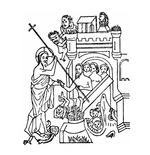 The Nature of Satan & the Church’s War Against Him

By Thomas J. Euteneuer | December 2009
The Rev. Thomas J. Euteneuer is president of Virginia-based Human Life International, which has affiliates and partners in 87 countries around the world. A trained exorcist, Fr. Euteneuer has been authorized to perform the ancient rite in several dioceses in the U.S.

I cast thee out, thou unclean spirit, along with the least encroachment of the wicked enemy, and every phantom and diabolical legion. In the name of our Lord Jesus + Christ, depart and vanish from this creature of God. + For it is He Who commands thee, He Who ordered thee cast down from the heights of heaven into the nethermost pit of the earth. He it is Who commands thee, Who once ordered the sea and the wind and the storm to obey…. Him thou shalt fear! Roman Ritual, Rite of Exorcism

The awesome prayers of the Church’s Rite of Exorcism (to be quoted in this column) are nothing short of a holy war carried out in the bosom of the Church against man’s mortal enemy: Satan. The fiend is made to know from the first moment of the exorcism that he is being assaulted by a superior spiritual authority that has the power to cast him out of the abode he has set up in the person he possesses, and that there is nothing he can do about it but resist as far as his strength will last. Then, with a word of command and the Church’s unmatched spiritual power, he is sent to the place he most fears: Calvary, the place where all evil was judged by Christ.

It is the constant teaching of the Church that the devil and his angels were created good but chose of their own free will to reject God. It is almost unimaginable that these beings, so close to God and with so much insight into His goodness, could reject Him. But I learned the truth behind this teaching firsthand in an exorcism I performed some years ago. When I commanded the demon to look at the crucifix and to bow down before the One the image represented, the demon answered me with a steely, bone-chilling malice that is impossible to duplicate. He simply uttered one word, Never. That “never” of a demon is his eternal and irrevocable choice to reject God, and unfortunately for us, he is adamant that we join him in that great apostasy.

The Book of Revelation tells us that when the devil was cast down by the valiant archangel Michael, “his tail swept a third of the stars from the sky” (12:4). This has been commonly interpreted in Church history as the rebellion of a third of God’s other angels, who joined Lucifer in his apostasy. That was the first and most serious rebellion of God’s creatures against Him. While two-thirds of the holy angels remained faithful in their time of testing, that wicked one-third comprises the Satanic army the human race contends with on a daily basis. It is important for us to realize that the fallen angels are in this war for keeps. They are deadly serious about their mission to bring us into their rebellion and thus separate us eternally from God. Their prize is our eternal human soul.

Discerning the Spirits of Deception

The presiding bishop and primate of the Episcopal Church has difficulty distinguishing the work of the Lord from that of the spirits of deception.

Jesse Romero describes his encounters with the supernatural and aims to convince readers of the terrifying power of Satan.

Psychiatrists as a group are generally not very open to, or knowledgeable about, the distinct possibility of demonic possession.