Volume > Issue > The Most Segregated Hour 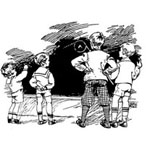 By Bryan Cross | October 2017
Bryan Cross is an Assistant Professor of Philosophy at Mount Mercy University in Cedar Rapids, Iowa. He previously taught at Saint Louis University, Lindenwood University, and Kenrick-Glennon Seminary. He and his family were received into full communion with the Catholic Church in 2006. This article originally appeared at CalledtoCommunion.com, a website dedicated to reconciliation and reunion between Catholics and Protestants, particularly those of the Reformed tradition, and is reprinted with permission.

My daily commute in St. Louis used to take me down a three-mile stretch of North Grand Avenue from I-70 to Saint Louis University in Midtown. Each time I drove that stretch, I would count the number of churches on either side of the road. I would count them because in driving regularly across and through these areas, I could not but wonder what role the proliferation of divisions among Christians contributed to the racial segregation, economic disparity, and poverty I witnessed there. And counting them reminded me regularly to pray for unity. The number was 14. Fourteen separated Christian places of worship, in only a three-mile stretch, the northern end of which is less than six miles, as the crow flies, from where Michael Brown was shot in Ferguson in August 2014.

Consider a child whose parents divorce when he is an infant. He grows up trading weeks and weekends between mom’s place and dad’s place; he might not have any felt perception of the disorder of the situation. For him, the separation of his parents can seem to be the status quo. Having been formed within that environment his entire childhood, his social situation might feel “normal” to him, and he might think nothing of it. Something similar can happen to Christians who grow up in the aftermath of the proliferation of schisms, where in a three-mile stretch of road one can count the meeting places of 14 different Christian denominations, some directly across from each other. Christians can drive such a road daily and think nothing of it. No grief wells up within them, no stab of pain in their heart, no silent prayer lifted to Heaven: “Lord, have mercy.” What began as a separation in protest long ago has become so normal that it perceptually disappears, while the separation remains.

Of course, all things being equal, the presence of places designated for the worship of God is a blessing, as is the freedom to worship according to our conscience. Without such blessings, these communities would presumably be much worse off. But as I counted these 14 structures each day, my internal question was this: “If we Christians did not segregate into separate congregations of theologically and racially divided members, what would the broader community look like with regard to racial segregation, economic disparity between races, and unequal educational opportunities and resources between races?” What role, I wondered, were our ongoing ecclesial schisms playing in the racial polarization and economic disparity I witnessed around me, even though these ecclesial schisms were not viewed as schisms, but merely as branches, where even the concept of schism has likely been lost? In short, does the proliferation and perpetuation of schisms have consequences with respect to social justice? Could the continued separation of Christians into like-minded, like-colored pockets, or “bubbles,” be a factor in the racial inequality, racial tension, and overall injustice I saw and experienced around me? Dr. Martin Luther King Jr. used to refer to 11 AM Sunday morning as “the most segregated hour in Christian America.”

Even a brief reflection allows us to see that it is easier to engage in “white flight” when the black Christians who move into my community do not worship with me, and I do not worship with them; when they do not receive Communion with me, and I do not receive Communion with them. It is easier to fall into us-vs.-them ways of thinking when the people with whom I worship look, think, and talk mostly like me, have the same general tastes in music, and fall into the same income bracket as me. It is easier to be suspicious of black youths when I’ve chosen a place of worship in which there are few or none, and so I do not regularly see any as my brothers and sisters in Christ. It is easier to depersonalize them when I do not exchange the sign of peace weekly with black men, women, or children in Sunday worship. It is easier to find no empathy for the plight of those black Christians who for me are “other” because I do not share a pew or sing together with them on the Lord’s Day. It is easy to ignore the poverty and homelessness of my black Christian neighbors when I choose to worship separately from them. And all the same things can be said of black Christians who choose to worship in congregations where there are no whites, in communities where there are white Christians.

Wallace Mendelson, a late great friend and mentor, was fond of saying that “no man…