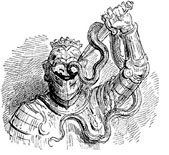 The modern world has neglected to read its classic poets and has turned its back on a crucial lesson taught for 3,000 years by the greatest writers of Western Civilization, the lesson that sin and crime, no matter how legalized, how euphemized, how tolerated, will always in the end reveal their inextricable association with loathsomeness and horror.

In Homer’s Odyssey, Odysseus must journey to Hades, where he sees vultures devouring the liver of Tityos for attacking the beautiful Leto, Tantalus (who stole the food of the gods) thirsting eternally in a pool of water that recedes each time he attempts to drink, and Sisyphus laboring to roll a boulder to the crest of a hill only to see it fall again to the bottom. The “awful agonies” of evildoers and the “eerie cry” of the dead so intimidate Odysseus that he yearns to return to the world of the living: “Sheer panic turned me pale, gripped by the sudden fear that Persephone might send me…some ghastly monster like the Gorgon’s head” (Book XI).

In Virgil’s Aeneid, Aeneas makes a similar descent into the lower world and confronts monsters, such as “the Lemean hydra/ Hissing horribly, and the Chimaera/ Breathing dangerous flames, and Gorgons…” (VI.390-395).