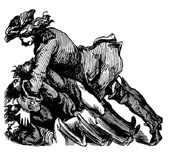 WHERE ARE THE PROLIFERS?

One of the major new antilife thrusts is the promotion of so-called emergency contraception, which is the post-intercourse use of high-dose estrogen birth control pills, which may sometimes act as an abortifacient (namely, early abortion). The votaries of the Culture of Death have been seeking to establish in law and public policy the desirability and legitimacy of these so-called emergency contraceptives, which are thought to be especially needed for teenagers who may have unwisely gotten involved in sexual relationships and are thus “at risk” for “problem pregnancies.”

At the same time, it turns out that many prolifers, normally opposed to the initiatives of the votaries of the Culture of Death, are quite reluctant to oppose the “emergency contraception,” apparently believing it is nothing more than a form of contraception — a mere prevention of possible pregnancies rather than the termination of pregnancies already begun.

If the promoters of these mis-called “emergency contraceptives” succeed in establishing their legitimacy in law and public policy, the integrity of the prolife movement, as well as some of the tangible prolife progress made in recent years, could be seriously compromised or undermined.

In the nearly 30 years since abortion was legalized by the Supreme Court’s Roe v. Wade decision, the prolife movement in the U.S. has made slow but definite progress in the effort to restore the right to life of the unborn. Polls have increasingly shown that a significant majority of Americans now oppose our current regime of wide-open abortion on demand. The growing conviction of many in this regard has been markedly strengthened by the exposure over the past several years of the horror of so-called partial-birth abortion, where the head of a nearly delivered child is punctured and the child’s brains sucked out, after which the delivery of the now dead child is completed.

Congress has more than once voted by large (but not veto-proof) majorities to ban this gruesome and barbaric partial-birth abortion procedure. In the process, the consciousness of many more legislators and citizens has been enhanced concerning just what abortion really is, namely: the brutal taking of a child’s life.

Neither Lewis nor Eliot was willing to condemn all uses of artificial contraception, yet both had obvious concerns about the moral implications of its use.

Finding the Truth in a Narrative of Lies

Who Are the Real Fanatics?

“I didn’t know Christians would help me,” the expectant mother told the counselor. “I thought they were all mean.”