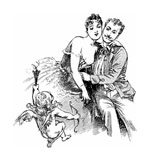 The Intrinsic Generosity of Life

SELF-DONATION OF THE FITTEST

By William V. Williams & Peter Kreeft | September 2009
William V. Williams, M.D., is Vice President for Exploratory Development at Incyte Corporation, and Adjunct Associate Professor of Medicine at the University of Pennsylvania. He is immediate past president of the Philadelphia Guild of the Catholic Medical Association and currently the Editor-in-Chief of The Linacre Quarterly, the official publication of the Catholic Medical Association.
Peter Kreeft, Ph.D., is a professor of philosophy at Boston College and the King's College (Empire State Building) in New York City. He is a regular contributor to several Christian publications, is in wide demand as a speaker at conferences, and is the author of over 45 books, including Handbook of Christian Apologe­tics, Christianity for Modern Pagans, and Fundamen­tals of the Faith.

Our understandings of natural processes have a major impact on how we view ourselves in relationship to the world. If we live in a world designed to favor those who are aggressive and selfish, we will tend to behave similarly. If, on the other hand, we view the world as governed by forces that favor collaboration, cooperation, and self-giving, we may act accordingly. The Christian view is that we are intrinsically good, that God created us good, and that although we don’t always act in accord with this goodness, due to original sin, it is still there within us, like a gem buried in muck. With God’s grace and our cooperation, the gem can be cleaned up. If, however, we think that our basic nature is selfish, then the best we can do is fight to overcome our intrinsic orientation to selfishness; but our own basic nature will always be there pulling us in the other direction.

Some students of evolutionary theory have postulated that our tendency to sin is in some measure inherited from our antecedents. It is noted that animals display many behaviors that in humans would be regarded as sinful, such as greed, anger, pride, etc. It is postulated that these sinful behaviors are present in humans because they were present in a common, pre-human ancestor. Thus, it is postulated that we sin in part because we have inherited from a common ancestor a “powerful tendency to act selfishly, no matter the cost to others” (Daryl P. Domning, “Evolution, Evil & Original Sin,” America, Nov. 12, 2001). This tendency is a consequence of the Darwinian process of natural selection, whereby the strongest are favored to survive. There is, however, a different point of view, which postulates that, in many ways, the natural processes that govern life contain a more powerful tendency to be generous, self-giving, and unselfish.

Pope John Paul II put forth a “theology of the body” that provides important insights into the entire created universe. In the theology of the body, the primacy of God’s life-giving love is seen inherent in the very basis of sexual union. John Paul notes that God, in His inner life, is a family, having the Divine Persons of Father and Son (the basis of family) and the Holy Spirit, who is the very Love between the Father and the Son. This Trini­tarian Family is One God, a manifestation of the union between the three persons of the Godhead. This points to another principle, one of collaboration and communion, which tends to bind and unify while unselfishly generating new life. This principle is manifest in the sexual union. Sexual union is viewed by our culture in selfish and utilitarian ways, and in the Darwinian view as a means to perpetuate the species, again a very utilitarian perspective. In John Paul’s view, sexual union is instead viewed as an act of self-giving, life-giving love. The self-donation of the husband to the wife, the acceptance of that gift of self by the wife, and the reciprocal giving back of her love, leads to a love so tangible that it could become a third person — a child. In this way, the marital embrace is viewed as a way of entering into the very inner life of the Blessed Trinity and sharing in the creative love of God. This stems from the principle of life-giving communion, which is inherent in creation as it is in the Creator. How might this view of the world be applied to evolution and, more broadly, to the natural sciences?

In the typical Darwinian view, the key to evolution is random mutation and natural selection. Random mutations in the genes of organisms within a species lead to variations in the species. Those variations that provide a selective advantage to the species will be propagated in future generations and make the species more fit for their environment. Those mutations that make an organism less fit will be selected against and will disappear from the species. The process of natural selection leads to survival of the fittest by competition for limited resources in the environment. Those most able to “selfishly” obtain these resources will be selected to perpetuate their species. Thus, those mutations that lead to a selective advantage in garnering resources are perpetuated, which would imply that “selfish” tendencies are encouraged, while “unselfish” tendencies would be selected against and eventually lost. While this is the widely held view, it ignores a basic question: Survival of the fittest for what? Or: What are the fittest most fit for? The implicit assumption is that they are fittest to garner resources needed for survival. The common view is that the fittest are the biggest, strongest, and most “selfish” in their ability to grab resources and hold on to them.

Letter to the Editor: September 2014

Special Insight into a Painful Period... A Question of Historical Fact... Not So Different After All... The Ghost of Pontius Pilate... A Total Consecration... Investigating Chesterton... Inaccurate & Unfair... A Divided Heart... Better Served by a More Recent Vintage... A No-Holds-Barred Exposition... Disturbing... An "Open Letter to Mozilla Employees"... Rosaries from the East