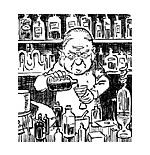 By John Martin | November 2010
John Martin is a veteran professional writer whose career includes stints as a Charlotte Observer bureau chief, a Business Week copy editor, and chief speechwriter for New York State Comptroller Ned Regan. His published books include the novel A Leopard at Maytime (Double­day), Roses, Fountains and Gold: The Virgin Mary in History, Art, and Apparition (Ignatius Press), and the sportive The Cat on the Catamaran (Zossima Press). His poems and essays have appeared in Chronicles, The Remnant, First Things, The Sewanee Review, The Christian Century, and The Chesterton Review. His produced plays include A Chosen Vessel: An Evening With St. Paul, which has been performed more than four hundred times here and abroad; The Troll Palace and Macdeath, both mystery thrillers; and the St. Francis musical Troubadour, for which he wrote book and lyrics.

It’s not exactly breaking news, but over the past century and a half the bold little doctrine of evolution, all but cakewalking where angels fear to tread, has been increasingly taking center stage away from the glory that is revelation and the grandeur that is spirit. It was bad enough in Darwin’s time, but today, with agnosticism in the ascendant and the naughty thumb of science blithely decanting human life into test tubes, evolution is riding higher than ever. More and more, the deep and ancient teachings of Holy Writ find themselves looking on from the wings while the Stephen Jay Goulds of this world prance across the footlights to make their pitch with the grinning assurance of Joel Grey in Cabaret: “So, life is disappointing? Forget it. And forget faith. With evolution, life is beautiful! We anthropoids are beautiful! Even the mutations are beautiful!”

And this is not, needless to say, a harmless state of affairs. Even with the help of divine grace, men have never found it easy to live virtuously. Set grace aside, replace worship with belief in a self-evolving universe with no ultimate authority to answer to, and suddenly such things as abortion, euthanasia, sexual anarchy, and brave-new-world genetics look very different. Evolution isn’t the only thing behind these dark realities, of course, but it’s definitely one of the pillars.

And make no mistake: it’s one tough customer. It walks, it talks, it dazzles, it deconstructs, it shapes minds and shakes souls, and it offers no apologies whatsoever for having evolved itself into that grander thing — evolutionism, the “ism” that speaks for the all. More phantom than fact it may be, but it has nonetheless become the sacred monster that explains and illuminates man and the universe — taught jealously in the schools, hammered home in PBS nature programs, and quoted with fierce certainty both at scientific conferences and in dinner-table conversations. It was even called “more than a hypothesis” by Pope John Paul II, but, praise be, when he was speaking ex tempore and not ex cathedra.

Is a Gender War Woven into the Fabric of Creation?

A review of The Evolution of Beauty: How Darwin's Forgotten Theory of Mate Choice Shapes the Animal World — and Us

A Eulogy for "Selective Death"