Volume > Issue > The Holy Sacrifice of the Mass 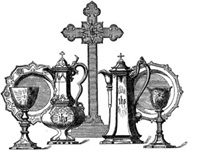 The Holy Sacrifice of the Mass

BLOODY OR UNBLOODY — OR BOTH?

There is probably no doctrine in the Catholic Faith that has been misunderstood more by Protestants than that of the Holy Mass. The Mass is the central act of Catholic worship: Christ’s sacrifice on Calvary is perpetuated because the priest offers it anew to the Father. It is not a new sacrifice, but the same one that Jesus offered on the Cross 2,000 years ago, the difference being that in the Mass it is — in a sense — unbloody. Jesus does not die or suffer again at each Mass, but is simply re-presented, re-offered to the Father.

In short, the only difference between the Sacrifice of the Cross and that of the Mass is that the mode of offering is different. On the Cross, the mode of offering was bloody; in the Mass, the mode of offering is unbloody. This is the only difference. Since Christ’s Sacrifice is present both on Calvary and at every single Mass, it is the same Sacrifice, and what is said of one must be said of the other. Therefore, since Christ’s Sacrifice on Calvary was propitiatory — i.e., sin-atoning — so is the Sacrifice of Holy Mass. The Council of Trent teaches very explicitly: “Appeased by this sacrifice [of the Mass], the Lord grants the grace and gift of penitence and pardons…crimes and sins.”

By giving us the Mass, our Lord has ensured a way to apply the graces merited on His Holy Cross to us today, to all of His faithful in any and every age. As James Cardinal Gibbons noted, “In the Sacrifice of the Mass I apply to myself the merits of the sacrifice of the cross, from which the Mass derives all its efficacy.” The Mass carries the Cross throughout the centuries until Christ returns. Each and every day (except Good Friday), the Church celebrates Mass to make present what Christ has wrought, to dispense and unlock again the infinite graces which He earned for us so that God’s wrath for us on account of our sins might be appeased. Since Christ’s Sacrifice is infinite and all-pleasing to God, there is potential forgiveness of any sin, if our souls are properly disposed and we are truly penitent.

Protestants will try to tell you that Christ underwent our punishment — He did not! If that were so, then Christ would have had to be sent to Hell for all eternity, for this is what we truly deserve (see Rev. 20:13-14). Christ suffered for us, no question, but He did so in order to earn for us God’s forgiveness, not so that we wouldn’t have to suffer or be punished temporarily. In other words, Jesus helped us avoid Hell not by undergoing the punishment Himself, but by offering Himself to God in order to appease God’s wrath and prevent His justice from being executed (see Isa. 53:10-12; Heb. 2:17). Just as lambs and goats were slain in the Old Testament in order to appease the wrath of God, so Christ was slain and slaughtered to appease God’s wrath, but with Christ it was once and for all.

The Catholic family toured the Basilica of the National Shrine of the Immaculate Conception -- North America's largest church -- in awe.

Letter to the Editor: October 1988
These Are Family-Life Experts?