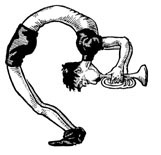 By Donald D. Hook | July/August 2004
Donald D. Hook is Professor Emeritus at Trinity College in Hartford, Connecticut, and the author of many learned articles and books on various subjects. In 1991 his The Plight of the Church Traditionalist: A Last Apology came out. In 2002 his Switching Churches: A Layman's Guide to a New Commitment invited readers to examine their choice of church (reviewed in the Nov. 2003 NOR). His book, Clerical Failure: Ten Stupid Things Clergy Do to Mess Up Your Church, came out in the winter of 2004.

On a Sunday in the middle of September 2003, the sanctus bells in our church suddenly went silent. They sat forlorn on the altar step. The altar server first sat and then knelt quietly near the bells, but did not bestir himself to ring them at the Consecration. Initially, my wife and I thought it was just a fluke; after all, we had always had sanctus bells in this church. Maybe this server was new and didn’t know. However, when the bells were physically missing the following Sunday, we knew something was up.

We caught on immediately. We had acquired a new pastor the previous spring. Knowing that it is, for some unknown reason, always necessary for a new pastor to make as many changes as he thinks he can get away with as soon as possible, we attributed the loss of the bells to him. Trouble was, he had not seemed like the “progressive” sort.

I wrote the pastor a letter, which he studiously ignored for weeks on end. The bishop, who had received a copy, also ignored me. When I wrote the chancellor, though, the pastor responded begrudgingly. The pastor probably did not like my pointing out that on page 111, paragraph 113, of Msgr. Peter J. Elliott’s Ceremonies of the Modern Roman Rite, it is stated that sanctus bells have long been authorized, with a footnote referring to the “General Instruction of the Roman Missal” (GIRM). The (new and improved) GIRM, paragraph 150, states that “a little before the consecration, when appropriate, a server rings a bell as a signal to the faithful.” It further states, as does also a committee report by the U.S. bishops, that the bell is to be rung at least at both elevations. The latter is the long-time custom at our church.

By not ringing the bells, not only is an important liturgical signal to worshipers — both Catholics and visitors — of the impending Consecration missing, but the significance of the Consecration is theologically reduced, obscured, almost obliterated.

Let me give a startling example of the thoughts of the pastor of a former church of ours nearby. When asked shortly after he took over the parish why he had dumped the bells, this priest quickly answered me: “When they ring the bells at my homily, then they can ring them at the Consecration. After all, there is nothing special happening at the Consecration.” We left that church. If the clergy do not believe what their Church proclaims, many disturbing questions arise.

Bells are used to warn or to summon. Bells express just about every mood and exigency; they are joyful, somber, pragmatic, ceremonial.