Volume > Issue > The Decadence of the Feminese Dialect 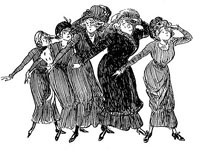 The Decadence of the Feminese Dialect

By Roy Barkley | February 1999
Roy Barkley lives in Austin, Texas. A member of the Fellowship of Catholic Scholars, he is a permanent deacon and a professional editor and writer.

Some years ago radical feminists mounted an assault on the English language in the name of “inclusivity.” In particular, they campaigned against the use of historically masculine morphemes — he and his, for instance — as generic forms applicable to both sexes. They also objected to the word man in the sense of “humanity,” and to similar immemorial English usages.

No one who knew anything about the matter —including the feminists — disputed that he, his, and man have in fact referred to both sexes for as long as the English language has been recorded. A look at any historical dictionary (the Oxford English Dictionary or the Middle English Dictionary, for example) establishes this irrefutably. No one has ever been “excluded” by this usage. But in their quest for what they considered political and social advancement — e.g., working in a corporate office rather than at home, being a politician rather than a mother — feminists clutched at any grievance they could find, including the bizarre and false assertion that our generic pronouns and word-forming elements exclude females.

Feminists promoted this notion even though they couldn’t help but know it to be false. I remember talking about it with a woman whose intelligence I had always admired. “The sentence ‘Does everyone have his pencil?’ certainly doesn’t exclude girls,” I said. She concurred, “No, it doesn’t. But why should the generic pronoun be masculine?”

The answer lies in our language’s own (Greek idios) features, which produce a language’s distinctive idiom. We use he and man generically because that has been the practice in English since the eighth or ninth century. That is the English idiom, organically developed and time-tested. Languages are not made to order or amenable to latter-day quotas by gender. Nor are they forgiving of those who twist them out of shape.

Why Hispanics Are Not 'Politically Correct'

Big Brother North of the Border

Canada is writing laws based on gender defined as a sense, an experience, and the result of expression: dress, hair, make-up, body language, voice, name, and personal pronoun use.

It's Time for Another Free Speech Movement

She required that we ban, Those damned suffixes, "man."