Volume > Issue > The Death of the Daily Paper 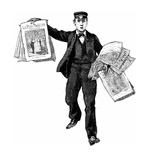 The Death of the Daily Paper

By Cal Samra | March 2011
Cal Samra worked as a reporter for the Associated Press and several newspapers, including The Newark Evening News (New Jersey), The Flint Journal (Michigan), and The Ann Arbor News, where he was also a columnist. He and his wife, Rose, have for the past twenty-five years been the editors and publishers of The Joyful Noiseletter, an award-winning Christian humor newsletter (PO Box 895, Portage MI 49081-0895; www.JoyfulNoiseletter.com). They are also the authors of ten humor/cartoon books that have sold over a million copies. This article is adapted from an address Mr. Samra gave to the Conference on the Future of Michigan Newspapers and Society, held at Western Michigan Uni­versity's Fetzer Center on March 27, 2010.

My all-time favorite journalist was Will Rogers, the great American humorist who was loved by both liberals and conservatives. This grinning, rope-spinning, Cherokee-American cowboy kept our nation laughing through the depths of the Great Depression. President Franklin D. Roosevelt said, “Will Rogers held the secret of banishing gloom, of making tears give way to laughter, of supplanting desolation and despair with hope and courage.”

Rogers once wrote in his newspaper column: “I’m fond of the candidate for public office who, during a fierce campaign, penned this note to his opponent: ‘Dear Sir: Let us make a deal — if you promise to stop telling lies about me, I will promise to stop telling the truth about you.'” Rogers poked fun at everybody, especially politicians of both parties, but he never attacked or slandered anybody for political or personal reasons. He was unfailingly courteous to everyone he met.

When he died in 1935 the entire nation mourned. A couple hundred thousand people showed up at his funeral, and a Protestant minister, a Catholic priest, and a Jewish rabbi offered prayers. What journalist today would get that kind of turnout?

Will Rogers had a loving heart. He was fair-minded. He had credibility with the American people. Americans of all political, philosophical, and religious persuasions believed Will Rogers.

A Question of Conviction

When sacrilegious art -- like a painting depicting the Virgin Mary wearing a G-string -- appears on a Catholic campus, what should be the proper response?

Are We Winning?... Falling into the Darkness of Error