Volume > Issue > The Darwinists & the Albigenses 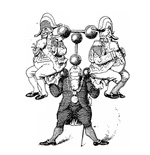 By Anne Barbeau Gardiner | June 2015
Anne Barbeau Gardiner, a Contributing Editor of the NOR, is Professor Emerita of English at John Jay College of the City University of New York. She has published on Dryden, Milton, and Swift, as well as on Catholics of the seventeenth century.

In Ecclesiastes 1:9 Qoheleth says, “There is nothing new under the sun.” Darwinist Michael Ruse (not to be confused with NOR Associate Editor Michael S. Rose) recently called evolutionism a “faith,” but is it altogether new? Or, to quote the Preacher again, has it existed “already in the ages before us”? One might well ask if evolutionism is a distant relative of the Albigensian heresy, a radical form of Catharism that prevailed in southern France for about four hundred years, from the eleventh to the fourteenth century. For when one examines the two “faiths” side by side, one finds striking parallels between them.

The Albigenses believed that the creator of this world is Satan. They regarded him as evil, but also as a god co-eternal and perfectly equal to the good God. They believed that Satan, the source of disorder and destruction, lies behind the beautiful order we see in the physical world, including in our own bodies. But they thought that this order was only an illusion. Moreover, they believed that Satan had not only created this world but is still in charge of it as its Dark Prince, giving out wealth, pleasure, power, and status to whomever he chooses. God’s providence is not even remotely involved with earthly success or happiness.

Likewise, for Darwinists, the creator of this world is not God but chance. For them, evolution is a blind, heartless, purposeless, unguided process. All that exists — including the human mind — is said to have come about randomly as a result of material forces operating over the course of billions of years. As Christopher Hitchens put it, “our maker” is not a “‘who,’ but a process of mutation.” And so, like the Albigenses, Darwinists believe that the order we see in the world around us is, in Richard Dawkins’s phrase, only an “illusion of design.” Human nature itself, far from being created directly by God in His divine image, is the casual product of a meaningless evolution in which the struggle for survival has left behind mountains of corpses. Thus, chance operates for Darwinists as the demiurge (Satan) operates for the Albigenses: It banishes God from any role in the creation and governance of this world. From the megastar down to the quantum particle, they see blind, irreducible indeterminacy. God’s providence is not even remotely involved.

The Albigenses believed that evil comes from our bodies, which are part of the material world created and ruled by Satan. They saw our bodies, by their very nature, as opposed to the good God, but they believed that our “divine” souls are trapped within our bodies.

Is a Gender War Woven into the Fabric of Creation?

A review of The Evolution of Beauty: How Darwin's Forgotten Theory of Mate Choice Shapes the Animal World — and Us

Since materialism denies the reality of an Intelligent Designer of nature, there is no extrinsic source for a moral code either.

A review of The New Geocentrists