Volume > Issue > Why Are People Atheists? 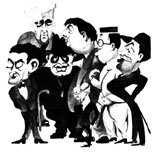 Why Are People Atheists?

By Paul C. Vitz | January 2000
Paul C. Vitz is a professor of psychology at New York University. A convert to Catholicism and the father of six children, he is the author of Psychology as Religion and other books. This article is excerpted and adapted from Vitz's book Faith of the Fatherless: The Psychology of Atheism, published in October 1999 by Spence Publishing Co.

In the academic world, serious reference to God in scholarly writing — not to mention the use of concepts like “providence” — is altogether taboo. To refer to God in any serious way would bring the legitimacy of one’s scholarship into question. But even in intellectual and academic circles, atheism did not become respectable until about 1870, and it continued to be restricted to small numbers of intellectuals into the 20th century. Not until the past half-century has it become a predominant assumption in public life.

In general, historians agree that atheism is a recent and distinctively Western phenomenon and that no other culture has manifested such a widespread public rejection of the divine. In view of the suddenness of the public shift from accepted belief to accepted unbelief, in view of its rarity in the historical record of other cultures, and in view of the continued high prevalence of private belief in God, atheism needs to be examined — indeed, explained.

The importance of atheism is, I trust, obvious, since it constitutes a major determinant of a person’s worldview. For example, if one believes in a personal God, life has obvious meaning, and one generally takes seriously the issues of moral and social responsibility. As Voltaire is reported to have said, “Don’t tell the servants there is no God, or they will steal the silver.” This view was later shared by Sigmund Freud, who believed that religion was necessary to keep the masses from acting on their sexual and aggressive impulses.

Has Science Made God Superfluous?

A review of The Grand Design