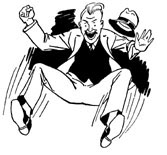 The Dangers of ‘Cognitive Psychology’

ON SUFFERING & ITS VALUE

By Ed Bergeron | November 2000
Ed Bergeron is a practicing psychologist in Lafayette, Louisiana.

As a graduate in psychology, I was indoctrinated into the world of “enlightenment,” which consisted of rejection of most traditional values in favor of “independent” thought and the scientific method. My professors espoused the superiority of the emerging rationalist culture, claiming that society would surge into a virtual utopian state once all vestiges of Catholicism, fundamentalism, and right-wing extremism had been eliminated. Being ambitious and wanting to excel in my field, I embraced their perspectives and, for a large part of my young adulthood, neglected my Catholic faith.

In theory, at least in the manner presented to me in the classroom, psychology appeared to be the new messiah for a complex and disordered world. In my training there was discussion of psychological principles that were supposedly able to engender greater mental health, self-fulfillment, freedom, and prosperity to almost anyone who was willing and receptive. In contrast, I was told how restricted and miserable were the inhabitants of any culture dominated by the Church and Christian values. However, once I graduated and entered society as an autonomous adult, I began to realize that, in practice, psychology did not live up to the expectations of theoretical discussion in a removed classroom. In fact, more and more I began to encounter the limitations of psychology and, at the same time, began developing a better understanding of my faith along with a realization that Catholic doctrine is not only sound but actually “fills gaps” left by psychology.

As my doubts about psychology grew, I began to seek answers from Catholic literature and periodicals. Of particular assistance was a book entitled Psychology as Religion by Paul Vitz, which presented a profound critique of Humanistic Psychology and its negative effects on society by promoting “self-worship.” In a similar vein I currently wish to examine another discipline of psychology, Cognitive Psychology, which, while useful at times as a therapeutic tool, is limited and can actually be dangerous when applied to the more serious questions of life and meaning.

In essence, Cognitive Psychology proposes that the thoughts people think can influence and cause human emotions. That is, the thoughts people think, as opposed to an actual event, generate associated feelings. For example, if a man strikes out during a baseball game and then thinks, “I am a total klutz,” it is likely that the resulting feelings will be intensely negative and may lead to depression, as “klutz” defines him as unable to do “anything,” as beyond hope. However, if the same man in the same situation thinks, “I know I can hit the ball; I guess I need more practice,” the resulting negative feelings will not be as intense, as his thoughts imply hope and capability. In the Cognitive paradigm, mental health is maintained by objectively viewing reality and recognizing the “true” positives of the situation. Mental illness occurs when the individual adopts irrational beliefs about the situation which then evoke negative emotions.