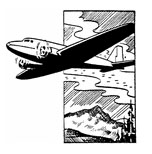 By Gordon C. Zahn | September 1994
Gordon C. Zahn is Emeritus Professor of Sociology at the University of Massachusetts at Boston. He was a Fulbright Scholar in Germany during 1956-57, and is the author of German Catholics and Hitler's Wars and In Solitary Witness: The Life and Death of Franz Jägerstätter (about an Austrian Catholic who was be­headed for refusing to serve in the military forces of the Third Reich). He also wrote Another Part of the War. The Camp Simon Story (a history of a camp for Catholic conscientious objectors during World War II).

Now that the 50th anniversary commemora­tions of D-Day are over, perhaps it is well to get to the question I have been asked by friends. How did I, an opponent of what Studs Terkel has described as “the last good war,” react to the re­enactment of the Normandy invasion; had it given me cause for second thoughts? Before I get to my more complete answer, I must admit that I was deeply moved by the televised reports of the senti­mental linking of old friends and former comrades as they returned to the scenes and relived the memories of what for many has been perhaps the defining event of their lives. I thought some features — e.g., the sight of septuagenarians parachuting down as they had done 50 years before — were contrived and much “too Hollywood,” but I shared the general relief that fortunately none was killed or seriously injured in the exercise. The patriotic hyperbole (“These men saved the world”) was predictably overdone, even for an oc­casion like this; but one could scarcely expect a more sophisticated analysis from political leaders mindful of the rhetorical benefits to be reaped from so rare an op­portunity. If there was anything truly saddening, I found it in the frequently expressed recollections of ha­tred as motivation and, even more, the remembered thrill and exultation derived from killing other human beings who happened to be wearing other uniforms.

Where was I on D-Day 1944? I was “in service” — Civilian Public Service, that is — as a conscientious objector assigned to Maryland’s Rosewood State Train­ing School for what were designated “the mentally de­ficient.” The sponsor agency for our unit was the Asso­ciation of Catholic Conscientious Objectors, an off­shoot organization set up by The Catholic Worker.

For us, D-Day happened to be “Movie Day,” the only scheduled recreational event of the week. That evening, for the first and only time in our two years of service there, the movie was preceded by a recording of the national anthem. Totally surprised and, therefore, without any prior consultation among ourselves, we remained seated in passive protest, much to the con­sternation of the rest of the audience.

The next morning, as Assistant Director, I was called to the Superintendent’s office to explain our “unpatriotic” behavior. Since there had been no group discussion, I could only explain mine. It was certainly not premeditated. I — and I suspect the others as well — interpreted the unprecedented anthem as an inten­tional effort to put us on the spot. Our past experience justified the suspicion. In the early weeks of our service at Rosewood, there had been a pattern of jeering calls of “C-O, C-O” as members of the unit walked around the grounds — so much so that one could follow the progress of the men while sitting in our rooms just by hearing the shouts.

That fewer than 500 fanatic atheist Communists succeeded in overthrowing a deeply Christian nation is a lesson to be remembered.

Here Catholics can discover a Church tougher and more unashamed than their own, and perhaps can learn how to persevere against a cultural elite that despises them.