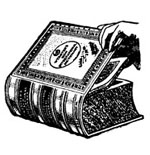 By Hurd Baruch | December 2014
Hurd Baruch is author of Light on Light: Illuminations of the Gospel of Jesus Christ from the Mystical Visions of the Venerable Anne Catherine Emmerich and, most recently, the novel The Stigmatist.

In our own lifetime, that “old-time religion,” which accepted in faith the picture of Jesus painted by the Gospels, has crumbled under assault from Protestant and Catholic biblical interpreters and theologians. In the guise of historical scholarship, they have increasingly decried it as unhistorical, naïve, or fundamentalist. As Pope Benedict XVI lamented, “In the 1950’s the gap between the ‘historical Jesus’ and the ‘Christ of faith’ grew wider and the two visibly fell apart…. The fact is that scriptural exegesis can become a tool of the Antichrist…. The alleged findings of scholarly exegesis have been used to put together the most dreadful books that destroy the figure of Jesus and dismantle the faith” (Jesus of Nazareth: From the Baptism in the Jordan to the Transfiguration, 2007).

Poor Jesus! His likeness has been more disfigured by scholars than it was by His scourging. “In recent scholarship,” said Fr. Raniero Cantalamessa, the pontifical household preacher, “Jesus has been imagined and presented as a type of first-century shaman figure; as a Cynic-sort of wandering wise man; as a visionary radical and social reformer preaching egalitarian ethics to the destitute; as a Galilean regionalist alienated from the elitism of Judean religious conventions (like Temple and Torah); as a champion of national liberation and…on and on. All these figures are presented with rigorous academic argument and methodology” (public debate, May 2007).

In an address to members of the International Theological Commission last year, Pope Francis called the work of theologians “risky” because “it bears temptations with it: hardness of heart, pride, even ambition” — pride in announcing new theories about age-old events, and ambition in striving to reshape the beliefs and worship of the Church. In this sense, one of George Orwell’s axioms from 1984 is highly relevant: “Who controls the past controls the future; who controls the present controls the past.” Historians crank out “revisionist” histories all the time. The same is true of theologians who vie to remake the past and the image of Jesus as set down in the Gospels in order to reshape everything from dogmas to doctrines to devotional practices to church architecture. In 1988 then-Cardinal Ratzinger delivered a lecture at St. Peter’s Church in New York on the crisis in biblical interpretation, in which he said, “Today, certain forms of exegesis are appearing which can only be explained as symptoms of the disintegration of interpretation and hermeneutics…. They are no longer interested in ascertaining the truth, but only in whatever will serve their own particular agenda.”

Radical revisionism comes in many flavors, including the interpretation of Scripture from the point of view of a particular ideology such as liberation theology or feminism. We will focus on the three main thrusts of revisionist deconstruction in current biblical scholarship, which are distinct yet usually found in combination. The first is a rationalist, materialist approach to the Bible. The second is exaltation of “hidden” gospels. The third is the so-called quest for the historical Jesus.

Those who spin theories opposing John’s authorship are doing a great injustice to truth and the cause of Christ.