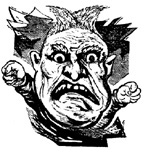 The Crisis at Crisis Magazine

By Michael S. Rose | June 2003
Michael S. Rose is an investigative journalist, and the author of The Renovation Manipulation, Ugly as Sin, and of course Goodbye, Good Men. His next book is Priest, to be released in July.

In an article published in the December 2002 NOR (“The Astounding Naïveté of Crisis Magazine”), I responded to a lengthy piece that appeared in the September 2002 issue of Crisis. The article, penned by Crisis Senior Editor Brian Saint-Paul, probed my “integrity.” Its very title, “A Question of Integrity: Michael Rose and the American College of Louvain,” signaled Crisis magazine’s intent to blacken my reputation.

In my NOR piece, I presented an enormous amount of evidence indicating that Crisis was wrong about the five-page section of my 264-page book Goodbye, Good Men it focused on. The disputed section detailed the harassment and dismissal of Joseph Kellenyi from the American College seminary at the University of Louvain. In the March 2003 Crisis, Saint-Paul responded with a six-page rebuttal (“Responding to Michael Rose”). He was not pleased with my NOR piece. In fact, his follow-up article plainly confirms what the NOR has been told over several months: Many Crisis readers expressed profound displeasure with the original Crisis article on the topic of Michael S. Rose and Goodbye, Good Men.

Many Crisis subscribers have indicated to me that they wrote letters to the Editor of Crisis, objecting to Saint-Paul’s September article for one reason or many. Nevertheless, not even one was given ink in the pages of Crisis. Many others indicated that they have canceled their subscriptions to Crisis or that they have simply decided not to renew. Rather than printing the letters of objection, Crisis undertook its defensive article in the March 2003 issue as a last-ditch damage-control measure. In short, there is a crisis at Crisis.

But the Crisis defensive began even before my NOR article was published. In the December 2002 Crisis, Saint-Paul responded to a letter to the editor written by Joseph Kellenyi (not a subscriber to Crisis), the former seminarian at the American College of Louvain. The September Crisis article suggested that Kellenyi is a liar and a crackpot. In his letter, Kellenyi objected to this portrayal, correcting Saint-Paul on several issues. Nevertheless, Kellenyi’s attempt to set the record straight about matters pertaining directly to himself was obstructed by a response from Saint-Paul, who took the opportunity to reiterate his conclusion that Kellenyi is nothing more than a disgruntled ex-seminarian of dubious character.

What Crisis readers would not know about Saint-Paul’s response is that the Crisis Senior Editor consistently gets his facts wrong in pursuit of a refutation to Kellenyi. For the sake of keeping this article to a readable length, I will offer just a few examples, although these examples are indicative of a larger pattern that characterizes Saint-Paul’s overall response to Kellenyi.

The Crisis at Crisis Magazine

Many Crisis readers expressed profound displeasure with the original Crisis article on the topic of Michael S. Rose and Goodbye, Good Men.

Catholics are sick of excuses and shifting the blame, and want bunker-busting solutions that get to the bottom of the moral and theological squalor.