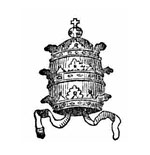 By Charles J. Gangi | December 2007
Charles J. Gangi, of Andover, Massachusetts, is a 2005 graduate of Boston College. This article is excerpted from his senior independent research project, "Pope Pius XII and the Catholic Church's Defense of the Jewish People During World War II."

Beginning with his election in 1939 and through the end of the Second World War, Pope Pius XII was a tireless advocate for peace and justice in a war-ravaged world. Indeed, one of his first acts as Pope was to release the encyclical Summi Pontificatus, “On the Unity of Human Society,” in October 1939. Furthermore, beginning that Christmas and every subsequent Christmas, Pius XII issued a Christmas Eve broadcast to the world in which he attacked the ideologies of those who had brought the war to mankind. Pius XII used these broadcasts to vocalize his disgust of Nazism in a public way; and while he never mentions Nazism by name, or any other specific ideology for that matter, the target of his attacks was clear. These Christmas broadcasts were lauded in the West as examples of the Pope’s moral authority in the midst of global conflict.

Pius XII could have chosen any number of occasions on which to make these broadcasts — the anniversary of his election to the papacy, Advent, Ash Wednesday, or Easter. His choice of Christmas says much about what Pius XII was trying to accomplish with these messages. By speaking on the Christian feast that celebrates the Incarnation of God as a man, Pius XII sought to reaffirm the unity of the human race, recalling that through His birth, Christ came into the world to save all mankind from sin and death.

Beginning with his election in 1939 and through the end of the Second World War,…