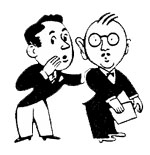 THE SECRET HISTORY BEHIND THE ONGOING CAMPAIGN

By Ion Mihai Pacepa & Ronald J. Rychlak | October 2013
Lt. Gen. (Ret.) Ion Mihai Pacepa, who served as Romania's spy chief and top adviser to President Nicolae Ceausescu, is the highest Soviet-bloc official ever to defect to the U.S. In 1978 President Jimmy Carter granted him political asylum and brought him secretly to the U.S. Gen. Pacepa is an American citizen and lives in the U.S., where he survived assassination attempts organized by Ceausescu, Yasser Arafat, and Muammar Gaddafi. His first book, Red Horizons (1987), helped bring down Romania's communist dictator and was subsequently republished in 27 countries. He has published articles in The Wall Street Journal, The Washington Times, the Los Angeles Times, L'Express, L'Évenement du Jeudi, National Review Online, and other U.S. and European newspapers and magazines. He is a columnist for PJMedia.com and a contributor to The American Spectator.

Ronald J. Rychlak is the Butler Snow Professor and Lecturer in Law at the University of Mississippi. His book Hitler, the War, and the Pope (Revised and Expanded) was published by Our Sunday Visitor Press in 2010. Rychlak and Pacepa’s book, Disinformation: Former Spy Chief Reveals Secret Strategies for Undermining Freedom, Attacking Religion, and Promoting Terrorism, was released by WND Books this June.

It is often thought that the worst damage from Soviet intelligence operations against the West was the theft of highly classified secrets, such as the technology for the atom bomb. Not so. The absolutely worst — and often irreparable — damage done to the free world was caused by the Kremlin’s operations that were designed to change the past. In KGB jargon, changing pasts was called “framing,” and it constituted a highly classified “disinformation” specialty. The framing operation that transformed Joseph Stalin from a vile political killer who slaughtered more than twenty million innocent people in the Soviet Union alone into a political god who guided over one-third of mankind generated forty years of cold war. The Kremlin’s “framing” of Pope Pius XII changed his reputation from that of a highly praised hero of the war against Nazi Germany into a Nazi sympathizer.

It is impossible to document fully the Kremlin’s framing of Pius XII in one magazine article. Suffice it to say that this framing consisted of a chain of intricately staged scenarios that took years to construct. It came to fruition only with the postwar generation, who bought into the lie because they had not witnessed the truth and therefore did not realize its gradual deformation. What follows is a brief summary of this immense operation.

The Kremlin’s framing of Pope Pius XII began a few days after May 8, 1945, when Nazi Germany capitulated to the Allies. Previously denied diplomatic relations with most of the free world, Stalin now happily joined the exclusive victors’ club and was even nominated for the Nobel Peace Prize. There was, however, one more enemy Stalin wanted to defeat: the Ukrainian Catholic Church, a Vatican enclave entrenched inside his own Soviet Union. This Church belonged to Pope Pius XII, and Stalin refused to allow any rival to interfere with his absolute reign. Since the sixteenth century, the man on the Kremlin throne had simultaneously been head of the Church in Russia.

Although Stalin could not dethrone Pius XII, he could eliminate the leaders of the Ukrainian Catholic Church, just as he had done with the leaders of the Russian Orthodox Church (168,300 Orthodox clergy had been arrested, most of whom were shot, during the purges of 1936-1938). Under Stalin’s plan, Archbishop Josyf Slipi of Lvov and most of Ukraine’s bishops were framed as “Nazi collaborators” by Stalin’s political police. All were imprisoned or sent to slave-labor camps. Further, some five hundred Ukrainian Catholic priests were sent, without trial, to gulags — officially phrased as “destination unknown for political reasons.” Hundreds of others were shot.