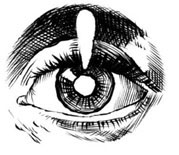 Blind, our racist possibilities are crippled. To be sure, the ears can be of help, give us clues of who is what, comes from where; but sight matters most, especially these days when schools are available to all, a big boost to a growing aural homogeneity. A student of mine told me a story a couple of years ago — he had a job answering the phone at the private school he attended on scholarship. So doing, he got into occasional conversations with parents and others, trying to reach particular students. In certain instances he got to know individuals, struck up continuing conversations with them. Several times it came out that he was (he “came out” as) black, much to the surprise of his telephone friends. The issue of race, then, is sight; what we do with the neuro-physiology that connects the optic nerve to the frontal cortex of the brain — hence, Ralph Ellison’s Invisible Man, and a substantial furtherance of its powerful theme in Toni Morrison’s The Bluest Eye, both first novels, both set, temporally, in the America that immediately preceded the civil rights era, the years when we as a nation didn’t want to look closely at so very much. Again and again, Ellison’s anonymous hero reminds us that his invisibility bespeaks our blindness; and Morrison directly picks up on that same theme — her Pecola Breedlove, all of 11 years old, will yearn for eyes other than those she has, in the hope, thereby, that a world hitherto disinterested in noticing her with any favor will now pay respectful, kindly heed.

Ellison’s protagonist is a young man whose naiveté contrasts with the continual corruption, trickery, and mischief he encounters within the world of his own people, and that of the whites whom he encounters on his journey from a southern college that is a thinly disguised Tuskegee to the north of Manhattan, Harlem. Morrison’s story centers on an Ohio girl, who already knows too much about life. The novel tells us, essentially, that a child can witness only so much pain and misery and meanness: Eventually, she shuts off all recognition, takes herself to another world. In that regard, Morrison tempts us mightily, we who summon psychology with quick reflexes. Her mere child (so we view a Pecola by our “developmental” standards) knows firsthand a textbook of psycho-pathology and sociology — knows her father’s violent, raging desperation, her mother’s hurt, scared vulnerability. These are people at the very edge of things in a Midwestern industrial city — the trek north, as with Ellison’s “invisible man,” come to naught. Morrison moves us through the seasons of a year in the life of that family, starting with the autumn, a time when death begins to take place in the natural world, even as Pecola’s world will soon enough begin to fall apart. Page by page we learn of a family’s hard-pressed life, but there is verve and pluck and toughness and shrewdness in those people, as well. The Morrison we would later know, the great singer of Jazz and Song of Solomon and Sula and Beloved, is already rehearsing and refining a powerfully lyrical, summoning voice that, no matter its subject matter, challenges its audience to more than the responsive self-indulgence of pity, the cheapest sentiment around, and the most deceptive, because it is a cover for anger, contempt.

In the novel’s time, in the span of that single year, madness gives a girl raped by her father, pregnant with their baby, a hallucinatory, alternative vision of things: Pecola’s imagined blue eyes a desperately reparative effort to locate a more secure and gracious world which she, in turn, will judge worthy — with herself, thereby, at last (as its inhabitant) capable of self-respect. Morrison published The Bluest Eye in 1970, when the civil rights struggle in the South had given way to an unprecedented national challenge to our foreign policy. Her Pecola Breedlove is a child of a desolate, unforgiving urban poverty, and if we are tempted to patronize this girl, all too quickly become woman, with our pity, we are forewarned by the first page, which offers a passage that parodies a Dick and Jane reader for children of comfortable, white suburbia: “Here is the house. It is green and white. It has a red door. It is very pretty. Here is the family. Mother, Father, Dick and Jane live in the green-and-white house. They are very happy.”

We are given that brief picture-perfect story three times, a clarion-call warning in the night: first as such a description would appear in a book for children, then as a narrative without punctuation, and finally as a jumble of tightly packed words that merge — a gibberish that is a madness all its own: the deceits of a pretentious world laid bare. We learn, right off, that this is a book about color (the black and white of race) and about the colors that have gotten connected to the subject, such as the blue of eyes that is also the blue of a clear, sunny day’s sky, where heaven is purportedly to be found, and the green of a flowering, luxuriant landscape, not to mention the cash some have in abundance, thereby enabling purchase of those fine (“green and white”) homes. For the Breedloves, in contrast, there is only the darkest, threadbare (black) living that takes place in a home as physically exposed, even flimsy, as it is emotionally vulnerable.

In the well-to-do sections of Managua, the Pope’s picture may be seen displayed proudly on the doors of houses, in any number of windows.