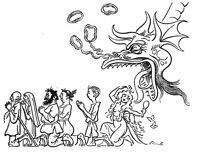 By W.A. Borst | March 1999
W.A. Borst of St. Louis, Missouri, has been a member of the board of directors of Birthright there and has served on the Archdiocesan Prolife Executive Committee. He hosts a weekly radio show on WGNU, and his book Liberalism: Fatal Consequences has recently been published by Huntington House Press.

Once you recover from the shock of the first encounter, it seems obvious, even predict able. But the first encounter is disturbing and disorienting: You feel as if you are present in old Carthage at a sacrifice to Moloch, the eater of children.

I refer to the encounter with a new inspiration on the part of proabortionists, an inspiration wondrous in its simplicity and staggering in its implications. To the claims of prolifers that religion forbids abortion, proabortionists can respond with fervor that they, too, are religious, they, too, are believers, and abortion is a spiritual practice and a sacred ritual. Abortion is an act of worship: Deus — or dea — vult.

This inspiration seems to be the genuine belief of some, as we will see. But it is sure to be used by others as a rhetoric of convenience, as a tactic in their war to keep abortion safe, legal, and frequent. I fear it could prove a shrewd tactic, with a fair chance of success. In our culture, which is morally self-indulgent and religiously illiterate but spiritually ambitious and consumerist in outlook, ideologies are labeled “spiritual” for the same reason foods are labeled “natural”: The word draws customers to the product, and there are no enforceable standards for applying it.

Since Americans, as a whole, continue to be surprisingly respectful of anything that calls itself religion, any co-opting of religious language by the proabortionists could reduce the momentum the prolife movement has built up in the past few years. At the least it could serve to confuse further the vast muddled middle of our countrymen who may not be sure if abortion is murder but who are fairly clear that government should not mess with anybody’s religion.

Physicians were largely responsible for the passage of laws to counter an epidemic of induced abortions among married Protestant women.