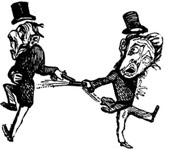 “But if it’s like that,” I grumbled, “if this part of moral theology is as clear-cut and traditional and restrictive as you say, why does it get so little effective emphasis from priests and bishops and popes?”

I was speaking to an expert on such subjects, and he responded to my question with a somewhat wicked grin. “The polite answer is that they’re held back by pastoral prudence!”

“Well, we’re supposed to accept persecution if it comes, even martyrdom, but not to court such tests and trials; so where moral principle is excep­tionally likely to infuriate Caesar, it needs excep­tionally careful handling.”

“And what’s the less polite answer?”

“Priests and bishops and popes are usually good men, often very good men. But they’re still only men, not always capable of really heroic cour­age. How did the priests and bishops of Nazi Ger­many respond to Hitler’s wars? Mind you, I’m not casting the first stone at anybody. I don’t suppose my own courage is all that heroic; I feel no yearn­ing for the martyr’s crown.”

And so the argument went on.

I had a dream that night. I seemed to be in a building of the ecclesiastical or collegiate sort, vaguely archaic in style, possibly medieval, but not clearly definable in terms of place or period. A priest of scholarly appearance was writing peace­fully at his table.