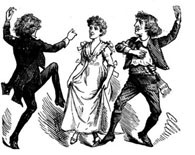 TO DATE OR NOT TO DATE?

By Charles E. Moore | March 1999
Charles E. Moore and his wife joined the Spring Valley Bruderhof Community of Farmington, Pennsylvania, in 1992. He works as an editor in the community's Plough Publishing House.

There is eloquent testimony in these quantitative measures. But it is the quality of the life lived in the maze of sexual liberation that most disturbs many of us who were teenagers ourselves in the 1960s and 1970s and 1980s. We know well the pain, anger, hatred, betrayal, fear, disappointment, and confusion that belief in the illusion brought. How do we help our own teenagers avoid all that? The revolution was an illusion, but we do not want to react by proclaiming to our children a counterrevolution that may be equally illusory. To some who have been through the sexual wars, lifelong faithfulness to a single partner looks not only difficult and rare, but even unreal. Many of us feel trapped between the patent falseness of the sexual revolution and the potential nightmare of simply staying the course through a stale relationship after the passion is gone, of sticking it out with a no-longer-lovable person in the name of social or religious convention. What do we tell our children? What do we tell ourselves?

In truth, the sexual revolution is not the cause of our sick sexual relations. The sexual revolution is not so much the disease as a symptom of the disease. Sexual confusion, impurity, and sin are the hideous weeds that shoot up where all can see them; but the hidden root from which they spring is our defective vision, not of sex, but of love. It is a vision of love that even we who deplore its sexual sociopathology cannot quite surrender. I call it the myth of romance.

“Romance” is a wonderful word (as indeed is “liberation”), but powerful words have their dark meanings, and I use it here to mean the idea that love, real love, is an emotionally driven, emotionally consuming relationship. In this sense, love — sexual love, intimate love — means possessing and being possessed by another, a very special someone, and in this relationship alone are happiness and fulfillment possible. This view of romance is so widely shared and so rarely remarked upon that we may think it simply natural. But it is something we have learned, and I suggest that we may need to begin unlearning it if marriage and the love that marriage makes possible are to survive. We must acknowledge our addiction to the gospel of romance, and examine its teachings.

What the Revolution Has Wrought

If Olympic decathlete Bruce Jenner’s widely celebrated “transformation” into a woman has taught us anything,…