Volume > Issue > Praying for a Nun 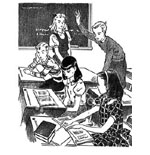 Praying for a Nun

By Michael Gessner | September 2018
Michael Gessner has authored 11 books of poetry and prose. His work has been featured in the American Literary Review, American Letters & Commentary, The French Literary Review, The Journal of the American Medical Association, The Kenyon Review, North American Review (finalist for the 2016 James Hearst Award), Oxford Magazine, Verse Daily, Yale Journal of Law & the Humanities, and others. He is a voting member of the National Book Critics Circle.

Dame Consolation stands beside my desk. Her arms are crossed under her white scapular, and she has an understanding smile.

Although Boethius’s Dame is a personification of philosophy and its solaces, she is also a feminine form with human features, one I had met many years before I ever read The Consolation of Philosophy, which contains many of the old verities of the Church Fathers, found also in Plato, especially his Phaedo, an early source of the precepts of service to others, sacrifice, the suffering and purification of the soul, the soul’s immortality, the dignity of the human person, and the pursuit of the Good — the bedrock of Christian eschatology.

Sister Martin, who taught everything a second-grader needed to know, or at least everything in the second-grade curriculum, had been standing behind me for several minutes with her arms folded under her scapular. Sister was young and tall and pleasant.

I was gazing out of a large classroom window at the leafy street below, daydreaming of the Flats.

Letter to the Editor: November 1989

Timely, Factual... A Jewish View... Nose Against the Windowpane

Only a healthy state of mind in touch with all of reality and desirous of truth in all of its integrity will possess the resources for real happiness.