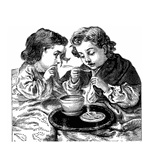 Phenomenological Soup for the Catholic Soul

That which simmers on the stove of the Catholic Church perplexes the should-be diners. Some sixty percent now seek nourishment elsewhere, so we might wonder about a problem with the recipe. Muddled chefs dump in one ingredient after another, without getting a mix that pulls the multitude back to the table. The soup suffers from ingredient overload: A mess of Cartesian, Kantian, Hegelian, and Heideggerian bones; shavings and bits of modernism, existentialism, decon­structionism, and countless other seasonings; all slow-cooking in the presently preferred broth, Jung Juice.

What should we name the current concoction? It’s difficult to determine due to the conflicting additives, but let’s call it Phenomenological Soup. Dished out for all of us, we’re encouraged to accept this subjectivistic blend as soul food. But since quite a few of us find it hard to swallow, we might benefit from asking a simple question: Is this soup really good for us — or is it just a big pot of mumbo gumbo?

Ordinary Catholics like us aren’t equipped to debate the upsides and downsides of each ingredient, the philosophical twists and turns with endless reinterpretations of meaning. Splitting the Catholic hair to accommodate a further step into subjectivism leads to the thought that one day soon the philosophical hoodwinkers will turn God into our own image and likeness. But let’s forego the philosophical theories and dwell on results.

As parents concerned about passing on our faith, we sent six children to feed at the trough of Catholic grade schools and high schools, and then off to Catholic colleges. Four years later, the Catholic colleges sent us back six heathens. Catholic academia, post-Vatican II, relishes those philosophical twists and turns, and the endless reinterpretations of once-settled doctrines that allowed our children to rationalize a faith position we barely recognize. Today, more than fifteen years after our last child graduated, only one lives a truly Catholic life. We could have purchased heathen education at a state school for a fraction of the price! Results of the Catholic college experience for our family: Religious indifference, eighty percent; Catholicism, twenty percent.

I did not want to go. I had until that time cloaked my fear of…

How Do I Love... A Euphoric Open Letter to George Bush...

Barbarians at the Gates of Civilization

ISIS militants are true barbarians. Unlike most American or European rioters, they are evildoers . They've devoted their lives to violence and terror, destruction and mayhem.