Volume > Issue > Two Theologians on the Development of Doctrine 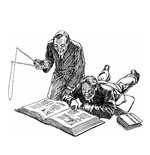 Two Theologians on the Development of Doctrine

By David J. Harrison | January-February 2010
David J. Harrison is an instructional designer at Holy Apostles College and Seminary, and an adjunct professor of education at Webster University. A resident of northern Nevada, he is a former Protestant minister who was received into full communion with the Catholic Church in June 2009.

A child’s understanding of the world differs greatly from that of his elders, as the latter have had time to reflect and ponder with the wisdom of experience: The priorities of childhood become more complex in adolescence, the critical pursuits of early adulthood are elevated in mid-life, and old age somberly reflects on the transiency of life while valuing the truth and joy that permeated it all.

The understandings and reflections of the Church after two millennia likewise should be seen as more mature than those of the Church in the first and second centuries. The soteriological doctrines of the apostolic Church ushered in the ages of Christological and Trinitarian developments, while extraordinary papal magisterial infallibility and Marian dogma crown the development of doctrine in these modern times.

Two polemical explanations for such development are exemplified in the writings of Alfred Loisy, a French modernist priest, and the Anglican convert John Henry Cardinal Newman. Both assert that Christian doctrine — the teachings, liturgy, practice, and traditions of the Catholic Church — has adapted to the varying lands, peoples, and eras she has encountered. They agree that such development strengthens the life of the Church and better presents truth to different cultures and different eras, and hence, such developments in doctrine are not to be eschewed but accepted without shame.

Yet, with a few exceptions, that is the extent to which these two theologians agreed.

Catholic minds left uninstructed by dissenting catechizers are offered sharp lessons by zealots such as Hunt.